Look at the scary, scary mob.

When faced with a vigorous band of constituents who wished to loudly express their discomfort and annoyance with both Russ Carnahan’s specific and general voting records, the Congressman did the proper thing: he engaged with them. He listened. He explained why sometimes – to evoke Burke – you have to exercise your own judgement in representing your district, and not knee-jerk defer to constituent opinion. In short, he was a Representative.

Yes, I’m joking. What he actually did was lock the doors on them before the speech, and ran out the back like a scared little bunny rabbit. Or a Democratic legacy politician who doesn’t understand why the grubby little proles are so exercised over things, all of a sudden.

Dana Loesch (also via Gateway Pundit) has more, including a video of the proceedings; note that the local news people are a lot more grounded in objective reality than most of their national counterparts. Do watch the videos and the pictures associated with this one; it’s good to see that we’re internalizing the attitude that you record everything from now on. Here’s one picture that I want to point out, for two reasons: 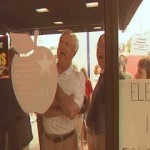 Which they do. I bet that Ed Martin would agree, too.