Weasel Zippers has the details – and, more importantly, the screen shots: essentially, what happened was that MoveOn.org did a little cleanup once General Petraeus stopped being a would-be whipping boy for Senator Obama and started being President Obama’s last, best hope for not mucking up the Afghanistan war.  This behavior would normally cause cranial explosions in anyone with the slightest appreciation of irony: fortunately for MoveOn, they are comprised pretty exclusively of hardcore antiwar activists, which means that they are as dead to irony as they are to the sufferings of non-European-Americans during Republican Presidential administrations.

On the bright side: since they’ve repudiated their own ad, they shouldn’t mind at all revisions to it.  My humble effort, after the fold. 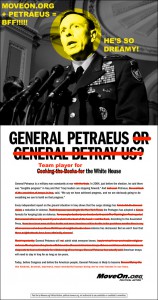 That should tide them over until another Republican gets elected President.