As in, the double standard argument? – because it’s freaking hard to argue with this logic: 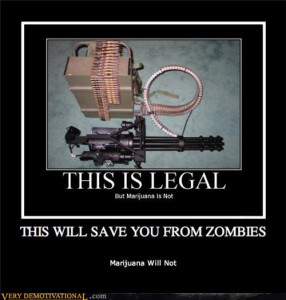 argues – fairly convincingly, I think* – that if you’re going to go with a firearm a .22 target pistol is better for zombie-killing.

*My major problem with Brooks’ general arguments against using high caliber weapons against the living dead is that I don’t think that he takes kinetic impact fully into account when judging their effects.  The same relative lack of internal body fluids that minimize the effects of hydrostatic shock will also provide a zombie’s internal frame with less structural integrity; and, at any rate, Newton’s Third Law still applies.  If a zombie stops a 20 mm bullet moving at a mile per second (I think that the above’s a M61 Vulcan, but this isn’t my field of study) something’s going to happen that will wreck the zombie’s day; I wouldn’t be shocked if the older ones didn’t get shredded on the spot.

I encourage my readers with military experience to correct any errors.  Again, military weaponry is not one of my fields of study.

5 thoughts on “End of the guns/weed argument?”