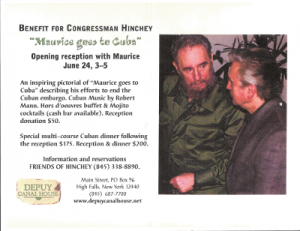 You know, there are people out there who want to end the Cuba embargo, and I get their point.  So let’s just have Fidel & Raul Castro shot – or I guess that they can be exiled – have the new regime promise whatever they darn well feel like, the White House can finally declare victory, and everybody saves face.  Because this alternate strategy of “the SOB can’t live forever” has one, fatal flaw: FIDEL CASTRO WILL NOT DIE.  AT THIS POINT HE LIVES SOLELY TO SPITE US.  HE MAY EVEN BE A SANTERIA ZOMBI AT THIS POINT, AND THUS WILL NEVER DIE*.

*Stole that one from Harlan Ellison, who was pretty sure that Fidel was a zombi.  He came up with this theory, oh, thirty or forty years ago.

PS: George Phillips for NY-22.  Wouldn’t get that close to Fidel Castro even with a hazmat suit.