Normally, there would be a temptation to get into the guts of this Big Government video showing Lefty and Democratic protesters at an anti-Koch brothers rally. For those who aren’t aware, the Koch brothers are the latest Two-Minute Hate object of choice among the netroots, who hate them for… giving money to conservative causes, apparently. Actually, I’m being kind: the netroots hate because the alternative involves too much self-reflection to be really comfortable.

Anyway, there would normally be a temptation to crack this video and extract the meat of the Left-wing Crazy inside, only: it’s all Crazy inside. These people were cheerfully advocating murder to anybody who asked them, in complete disregard of the fact that they were being filmed:

I know, I know: there is something kind of disturbing about seeing people relaxed enough to express sick and twisted rhetoric like this without fear of consequences – and it’s definitely infuriating that you and I have to watch and filter every word we say or write, or at least be aware that if those words can be twisted, they will be. But look on the bright side: if this crowd is any indication, being able to spout their racist filth freely has the side effect of gradually lowering their IQs to room-temperature levels. Given that the Left generally likes to sneer at the Right’s collective intelligence, well… karma: it’s what’s for dinner.

Still, I want to show you the worst person in this video. And let me tell you, she had some competition.

I don’t know her name… 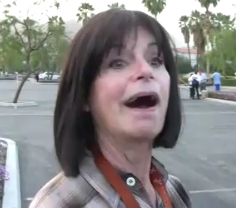 …and then apologized for that. 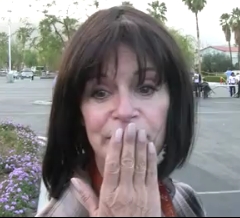 So, let’s recap: saying that you want to lynch an uppity black man and his race traitor wife fits this woman’s standards of ‘acceptable discourse;’ but using a common (and not particularly egregious) American pejorative is apparently… uncivil. Remember this. Remember what they say when they think that they’re safe.

And remember to get and keep a video camera with you whenever possible. Because you can’t rely on other people to do your civic duty of getting ugly things on the record.

*She knew Ginny Thomas by name, too.

6 thoughts on “The Left’s Common Cause: “Lynch Clarence Thomas!””