For my regular readers: forgive me for revisiting this issue one last time; but every so often I gotta talk about the stuff that interests me even if it doesn’t interest anybody else.  We’ll get into other stuff after this, I promise.

This, of course, was in reference to my Jane Yolen post, which has gotten a certain number of people upset at me, simply because I pointed out that the woman is a hateful bigot*; I’m apparently now going to be the target of a grand digital crusade, or something.  And, I will admit, decent traffic yesterday, thanks largely to an apocalyptic dKos diary entry and a – yes, they’re still around – Democratic Underground thread: 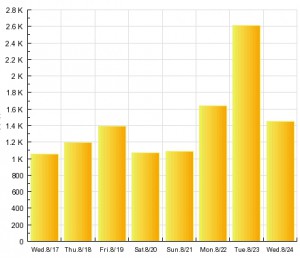 But nothing special.  Particularly since that number is going to be overshadowed in the next few hours… 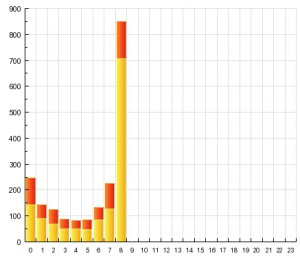 …by this link from Glenn Reynolds.  Now that is a traffic spike; and based on my experience it is going to be repeated for the rest of the morning, because a lot of people read Instapundit at work, and those people work in at least three time zones.  And then it’ll die down, and I’ll go back to about 1K+ a day, which is my current plateau.  Which is great; this is my geek/filthy lucre/vanity blog that I use when I want to talk about stuff that’s not suitable for front page posts or diaries at RedState.  Meanwhile, I assume that the aforementioned digital crusade will… well, not die down.  It never took off in the first place.

There’s a point to all of this, I swear.  The Holy Grail of any online activist is to have something ‘go viral:’ I’ve been doing this gig in one form or another for almost a decade, and the phenomenon happens just often enough to make it seem not completely implausible.  But you cannot just throw something out, and expect it to stick.  There is an X-factor to any compelling story that actually causes it to be spontaneously picked as worthy for mass memetic repetition: if you have that X-factor, you end up with Snakes on a Plane**.  If you don’t have that X-factor, you have the Wisconsin recall movement… which had everything it needed for a mass movement except an actual mass, and thus failed miserably in its goal***.

All of which is to say that ‘going viral’ – which neither the DU thing nor this later Instalanche actually is, by the way – should never be a goal.  It should be thought of as the happy by-product of fate, luck, Divine favor… however you want to think of it.  Your goal is… well, your goal is up to you as a blogger, of course.  But unless you want to chase spontaneous memetic reproduction like some researchers chase tornadoes, you’re better off with constructing the best memes that you possibly can, and not getting too frantic over the thought that most of them won’t survive on their own in the wild.

*I’d just like to note for the record, by the way, that if nothing else this entire incident demonstrates once and for all just why public schools have the generally poor reputation that they have.  Particularly when it comes to 19th Century American history.

**Which succeeded marvelously as a viral phenomenon.  As a movie?  Not so much.

***Yes, of course progressives wanted to spend thirty million dollars to get two state Senate seats that won’t let them change policy, and at least one of which they’ll promptly lose again next year.  Whatever.

****Although I may be expanding this thought for a class, later.