“We operate as though we are not in a global economy,” says Granholm. “In theory, free markets and laissez faire make perfect sense, but in practice, our competitors are eating us for lunch.”

Remember, this was supposed to be one of the Democrats’ smart ones.  One of the people that was supposed to make you wistful that we only let native-born citizens be President (Granholm was born in Canada).  Kind of alarming that she’s now talking about how free market capitalism just isn’t practical? – Because unless Jennifer Granholm had a stroke recently or something, this is probably not a new opinion for her.  Which means that she probably had that opinion while she was running the state of Michigan.  Which explains the current state of Michigan rather handily, really.

Now, I could rebut this in two ways.  First off, I could subject all of you to three paragraphs’ worth of generally tedious discussion about how: we don’t actually have as free a market system as we should; we have a less free market system as we had several years ago, thanks to the current insane clown posse of technocratic theoreticians running the country; that it’s not surprising that if we’re deliberately using a leftist (read: inferior) economic model, it then turns out that the countries with more experience in such things are doing relatively better; and that Jennifer Granholm should thank God for term limits, because even if she had been eligible to run in 2010 her own party would have broken her kneecaps to keep her out of the race.  Or, I could show you this graph* showing the unemployment rate during ex-Gov. Granholm’s tenure: 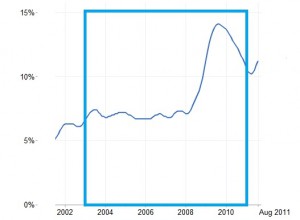 …which pretty much makes my point for me.  Well, that and the fact that Detroit is seriously contemplating going back to farming as an alternative revenue generator.

PS: Granholm ended her Salon interview by rubbing her hands at the thought of a Perry candidacy, by the way: “…Perry is just so far out of the mainstream in terms of Michigan and the industrial Midwest. I don’t see how that works.”  No kidding. Hey, real quick, Jenny: what’s the difference between Michigan and Texas?

Texas still has a functional industrial base…