Assuming that it’s not just some ruthless capitalist making a buck.  In which case: Go, Team Adam Smith.

I want to show you something.  It’s called the Occupy – A Grown-Up Coloring Book Novel*, and while Hot Air is fully justified in eye-rolling it to the oblivion that such a thing deserves I’d like to point out my immediate observation** was as follows: Hey, guess what’s not on that cover? 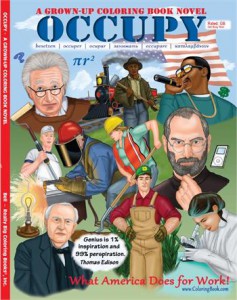 Guess they had some difficulty coming up with a suitable candidate…

*Click the link to see my little joke. Really, this

is a much better choice.

**Well, my immediate observation was “Like the target audience can be expected to color within the lines.”