You read this Roll Call article, and you get the feeling that the author was doing his level best not to laugh at Murphy:

For those without video: it’s an ad that compares what Rep. West and Mr. Murphy were doing on the night of February 16, 2003: West was getting ready to deploy to Iraq, while Murphy was ending a night of bar fights and public intoxication by getting arrested.  Hold on, let me preserve a screen shot for posterity: 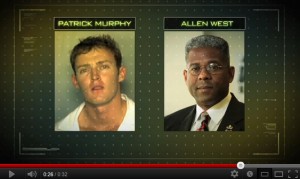 God, but this business is fun, sometimes.

Anyway: the Murphy campaign is mildly upset about it being pointed out that their guy is a drunken bar brawler, so they hit back by reminding Roll Call that Allen West had to retire from the Army after he got some information out of a jihadi by firing a bullet past the guy’s ear, with the tacit understanding that the next bullet fired would be shifted six inches to one, critically important, side.  This is notable for two reasons:

In other words: in case you’re wondering what a campaign on a downward trajectory actually looks like, try looking at Patrick Murphy’s.