This is a time where two pictures are worth more than a thousand words each: 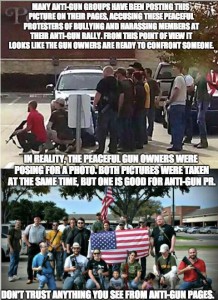 Oh wow. MT @charlescwcooke: Aha. MT @linoge_wotc: It turns out that picture is the other side of this picture: http://t.co/tYv2g8Q6TH

…background here: the short version is that apparently the first photo is going around the usual suspects as an example of awful gun owners threatening gun control protestors. The problem is that the second photo shows that said gun owners were… posing for a photo. Smiling. With their kids. And multiple American flags. And showing proper gun safety. In other words: not threatening anybody. Well, anybody who doesn’t find the mere existence of guns, American flags, and/or children to be in of themselves threats.

Anyway, three things to take away from this:

3 thoughts on “Two pictures that show the utter mendacity of anti-gun websites.”