So they found that cobalt-60 that got stolen, and now they’re looking for the corpses of the guys that stole it (they apparently opened up the box, which is NOT A GOOD IDEA TO DO WHEN COBALT-60 IS INSIDE THE BOX). Two things: one, my sympathies for what happened to the robbers is not infinite:

The cargo truck, equipped with a crane, was nearing its destination in the darkness early Tuesday, several hours before the storage facility opened. While waiting for daybreak at a gas station in the state of Hidalgo, north of Mexico City, the drivers were jumped by two gunmen who beat them and stole the truck, said Mardonio Jimenez, a physicist and high-ranking official with Mexico’s nuclear safety commission.

I wouldn’t have sentenced them to death for assault and battery, but it’s not like they got mailed the cobalt-60 by mistake, and opened up the box in their living room.

Two: why the hell did they open the box?  Think about this for a second: you rob a truck.  You loot the truck, and you see a box with this symbol on it: 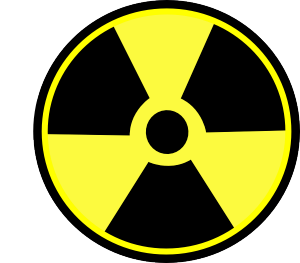 Would you open that box? – Because I would not open that box.  I would, in fact, carefully get out of the truck, wipe down everything that I might have touched, and gotten the hell out of there before all the people with guns who would be looking for that truck and that box found me.  I might even buy a burner phone and let the authorities know that the truck that they were looking for was out in the desert, no, no need for a reward, have a nice day, drop the phone down a sewer grate*.

Again, I wouldn’t open the freaking thing.  So why did they?

PS: My wife feels that I am assuming that the radiation trefoil is a much more ubiquitous part of Western popular culture than I think that it is.  I do not think that I am so assuming, but the problem is that she’s actually a little bit brighter than I am, which is something that I have to take into account.

*I am not a criminal, but I have played a few Chaotic Good rogues in my time.  This does not make me experienced, but I at least know how far my ignorance extends.

12 thoughts on “I’m confused about this Mexican Cobalt-60 theft case.”