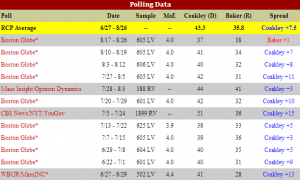 Now, make no mistake: right now that Boston Globe poll is pretty much the Platonic Ideal of ‘outlyer.’ Not only is it the first poll that the Boston Globe’s done that shows Charlie Baker ahead; it’s the first one that anybody’s done that does that. Safe bet is, the race will reset to something more expected.  Heavy skepticism is, as they say, warranted.

*This is, frankly, a fairly safe set of assumptions.