Remember when ‘ritual human sacrifice’ was an archaic term? …Yeah, I miss those days, too.

Yes, I am being perfectly serious.  You have probably all seen the image of Islamic State (IS) ritually slaying two gay men by throwing them off of a building, but I want you to look at this: 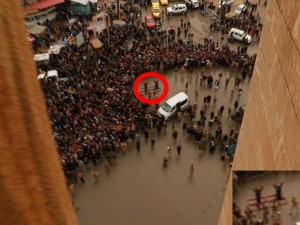 See those two guys down there at the scene with their hands up?  At first I thought that they were two of IS’s evil clerics, offering chants and leading the crowd.  …Silly, stupid, naive me: they’re actually two more human sacrifices being crucified.  Crucified, shot through the head, stoned to death, thrown off of buildings: apparently, this new god that IS worships** isn’t too choosy about how it gets his death energies.

By the way: I really, really resent the fact that I have to describe what’s going on in parts of Iraq and Syria in terms that would be better suited for a Conan novel or fantasy role-playing game.  Particularly since it wasn’t like this when GWB handed over the Iraqi reconstruction process to Barack Obama in ’09. And it’s going to get worse before it gets better : the GWOT isn’t over, ladies and gentlemen. It’s simply going to get merciless.

*That is not profanity. That is a theological opinion.

**Please do not insult my nation’s Kurdish allies by suggesting that they worship the same deity that IS does. The Kurds’ Allah may very well be a false god in your eyes, but he’s still a much better one than the one getting sacrifices from IS right now.