Come, I will conceal nothing from you: I am pro-life, but it is not my top issue. I generally don’t talk about it, much, because there are a good number of people for whom life is their top issue and I trust them to handle the discussion. All of which means that it takes a certain amount of Oh my God what is that? to get me to make a response. 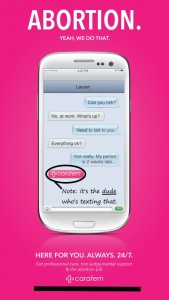 Yeah, most of the Right is reacting to this – Hot Air called our collective response “a mix of horror and dark humor,” which sounds about right – but I just wanted to note that the older I get, the more I’m struck by the fact that Left-feminism seems to be more and more determined to create a perfect world for particularly immature seventeen year old heterosexual males. Forget, for a moment, the concept that this company’s imagined first instinctive response by a prospective father to Hi, I might be pregnant would be Let’s get that abortion set up. It’s that this company seems downright desperate to create a culture where having an abortion would have the same moral status of fixing a hangnail.

Yeah, the world doesn’t actually work like that.  But ads like these do help counter the propaganda that there’s no such thing as pro-abortion activists, or pro-abortion activism, or a pro-abortion movement.  It’s become increasingly clear that there are people out there who have in fact desensitized themselves on life issues in a way that would shock and horrify the very liberals who cheered Roe v. Wade. Which is bad enough; but for the love of everything holy, why is modern left-feminism so determined to sexually reward men for being sex-pigs, instead of functional adults? What good is that for anybody, really?

PS: Far be it from me to offer unsolicited advice to anyone, but here goes: [insert non-triggering term that collectively refers to women here]. If your boyfriend* sent you a link to that advertisement with a hearty “Right on!” or “Take back your bodies!” or whatever the current favorable signaling would be, rest assured: this really is one of those times when you need that particular man like a fish needs a bicycle. A dude who thinks that this ad is awesome is going to be a dude who will not pick up the phone at 3 AM when your car breaks down, will abruptly absent himself from your life when you need to get across the country tomorrow in order to visit your favorite uncle before he dies – and who will viciously blacken your name in your social circle if you decide that you wanted to keep your baby after all.

*Assuming that he is your boyfriend.  I’m given to understand that it’s more and more acceptable these days for males to skate out from under that designation these days.

4 thoughts on “Carafem: the perfect intersection of left-feminism and bro culture.”