Well, really the entire Narnia chronicles – but I think that C.S. Lewis’s The Voyage of the Dawn Treader is the best of a good series, and at some point I need to watch the movie.  Of course, I don’t need to tell any of you this already, do I?  The Narnia series retains its significance, even today:

Well, for given values of ‘today.’

…out of respect for a man who has since passed on*; but it is no longer an UNFINISHED, bad short story**.  I’ve had the blessed thing stuck in the back of my head for two, three years: I was wondering if it would ever get completed.  Now I’m going to forget about it for a day or two, do the necessary pass-through, and send it on its way.

That’s it.  And, yes: I’m describing the literary equivalent of describing an itch that I’ve finally been able to scratch.  And at that I’m probably being kind to myself; there are so many other, less couth, metaphors that would work in this context…

*Larry Latham: he was the fellow who did the amazingly good Lovecraft is Missing webcomic, and he was taken from us far too soon.

**That turn of phrase shamelessly stolen from Stephen King’s It.

Takes longer than you’d think.  Trying to balance finding new markets with submitting new things to markets that have already rejected something of yours is likewise a little tricky. You don’t want to give up on one particular market, but you don’t want to get into a cycle where you get your stories serially (heh) rejected by each of three or four publishers in turn.  Also, you know, there are all those submissions guidelines that you have to read: I mention this because I suspect that a lot of people don’t read submissions guidelines, and they probably should.

Still, productive enough work, in its way. Not overly creative, but productive. Also emotionally fraught, but you need to scar tissue yourself about that sort of thing. Life ain’t fair, and neither is the publishing industry.

Not a sale, but the story made it past the first round. Which is encouraging! Lord knows you can feel stalled in this business, sometimes.  Or more than sometimes… still, mustn’t grumble.  I’ll know more at a later time – and, again, this isn’t a sale, just me making advancing along in the process.

Thanks, by the way, for all the encouragement that I’ve gotten in the past and will get in the future. It really does help.  Anybody who does art will tell you that, too.

Is there something interactive online somewhere that can help with that*? – Not that I’m ever likely to need to convert from that alphabet into the Roman one, but it might be helpful if I ever need a block of text for a game, or something. …For that matter, is the Tengwar subject to copyright? I mean, obviously Tolkien created the various scripts and alphabets himself.

*I did look, and I found some helpful tables, but I’m looking for something more interactive.

END_OF_DOCUMENT_TOKEN_TO_BE_REPLACED

Now, you could order “The International Spy Film Guide 1945 – 1989” via Amazon, but if you get it directly from the website then it works out to about $200 American, which is about thirty bucks less.  I don’t exactly want to own this, though*. I want my local library to own it.  I now bitterly regret not spending the last ten years worming my way onto whatever advisory board handles said library’s acquisitions…

Via Ken Hite. Of course.

*More accurately, I don’t have $200 to blow on something that will spend 95% of its life on my shelf, gathering dust.

I am fairly embarrassed that I somehow missed Ken Hite’s and Christina Rodriguez’s Goodnight Azathoth. Sloppy of me, really. Oh, well, my oversight was easily fixed. 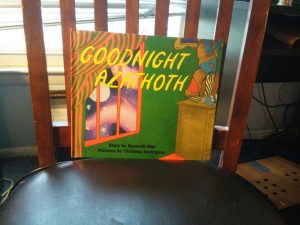 END_OF_DOCUMENT_TOKEN_TO_BE_REPLACED

I am starting to feel that the single most egregious thing that was done to me in college was to omit explaining just how entertaining Jane Austen was as a writer. I mean, sheesh, it turns out that Northanger Abbey is a meta-fiction parody that snarks out on the excesses of the genre fiction of the day… and written by somebody who was good at said genre, too.  I would have happily read that.  Shoot: if Jane Austen was around today I’d probably be signed up for her Patreon and her Twitter feed. She’d certainly be writing books in the genres that I read.

And so, adieu to Red Storm Rising. Heh.  A Jane Austen technothriller.  The mind reels…

Come, I will conceal nothing from you: one major reason why I bought Empire Games was for the amusement of watching Charlie Stross extricate this particular story line from the morass of pseudoscience and conspiracy theory that he originally drove it into.  ‘Peak oil.’ ‘Aspartame causes brain damage in children.’ ‘Secret US nukes set up for domestic false-flag operations.’ ‘President Rumsfeld, master manipulator and Destroyer of Worlds*.’  It’s not nearly as bad as David Gerrold’s continuing inability to figure out how to get humanity to win the War Against the Chtorr**, but neither is it trivial.  Fortunately, ‘alternate history’ can handle this sort of problem…