99 cents per PDF for the entire Eclipse Phase future horror-cyberpunk RPG digital line (ONE DAY ONLY).  Feel free to go here to pick it up, but be careful.  That 99 cent thing can run up the score pretty quickly.

If you are a Patron, you can see them here:

Far-future post-apocalyptic fantasy and non-evil necromancy.  Hope you like it!

It’s sometimes referred to as ‘Meta-Money’ by those members of the occult underground who know something about roleplaying games (a surprising number of them don’t).  It typically takes the form of a piece of fake $20 currency from a certain board game, suitably inscribed with an increasing number of sigils and mystic runes; the only rule for the writing seems to be that it also has to involve the number 20 somehow.  Nobody knows who started the first one; but you just know when a proffered piece of Monotony Money is the real deal.

END_OF_DOCUMENT_TOKEN_TO_BE_REPLACED

This… is an example of what happens when you have to balance what the client wants with what the vendor can produce.  What the client (in this case, an extremely well-connected general high up in the French military hierarchy) wanted was two-man giant caterpillar cavalry, for admittedly mostly ceremonial use.  What the vendor could produce was a giant caterpillar permanently ‘frozen’ at its immature state that could barely carry one man, provided that he had a small amount of gear.  When the general in question saw this, of course, he immediately… opened his mouth, contemplated the matter, closed his mouth, then told an aide to go fetch him a certain minor official in a certain obscure department who certainly wasn’t a representative of the Third Republic’s most secretive black ops organization.

END_OF_DOCUMENT_TOKEN_TO_BE_REPLACED

It’s not a typo and it’s not a transcription error. Caf? is the morning drink of choice in the Age of Miracles: the ‘?’ is there to establish that the stuff does not precisely fully exist in our dimensions. It tastes marvelous, and not in a mysterious way, either. Imagine a rich, but not overpowering chocolate-vanilla contrast with an aftertaste of banana that somehow is enjoyable whether or not you like those flavors and you’re not too far off. Caf? has clearly been designed with human taste buds in mind.

END_OF_DOCUMENT_TOKEN_TO_BE_REPLACED

There are certain items that are so alarming that they get suppressed by the Conspiracy.  Sometimes the very name of the thing being suppressed gets hidden, in order to hide it from people.  And then you have things like the Shazaam Gun, the broad details of which are included in every Man in Black’s new hire orientation packet. The Conspiracy wants its agents to be proactive in hunting down new versions of this profoundly dangerous headache.

END_OF_DOCUMENT_TOKEN_TO_BE_REPLACED 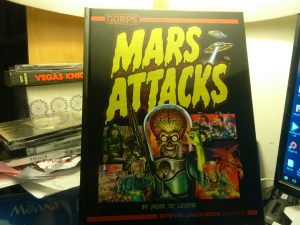 For this one, blame my wife.  I think.

Yes, as in ‘big holes in the ground where you dig solid, raw laser light out of the walls.’  Sure, you could make laser beams by collimating light into a focused ray.  If you’re living in the 21st century AD, that is.  But if you’re a clear-eyed citizen of any number of the modern, technologically mature polities of the 23rd Century’s Solar System, you’d rather get your laser beams from a mine on one of Jupiter or Saturn’s moons. And yes, it’s real laser light, somehow.  Still usable, though! …Well, after a certain amount of refining into a crystal form, that is.