OK, this is how you reinforce a narrative in This Town.  You start off by writing something like this:

The fight for the Senate majority is increasingly focused on five races: four controlled by Democrats and one held by Republicans. These contests — Alaska, Colorado, Iowa, North Carolina and Kansas — are acknowledged by both sides to be very competitive, and because of that are likely to see the heaviest spending by both the party committees and the outside groups over the last five-plus weeks of the midterm election.

To a Democrat, that doesn’t sound too bad.  That Democrat already ‘knows’ that Alaska is being locked down for the GOP (true), Colorado is trending the GOP’s way (true), Iowa hasn’t yet slipped into GOP territory yet (actually, it probably has), North Carolina is still in the Democratic zone (we’ll see), and Kansas is a wild card (no, not really).  So there’s still a chance, right? END_OF_DOCUMENT_TOKEN_TO_BE_REPLACED

“It’s not going to be a good year for Democrats by definition,” [former White House press secretary Jay] Carney said. “The sixth year is always particularly bad for a president’s party. You couple that with the fact so many seats are defended by Democrats in red states where Mitt Romney did very well against the president, double-digits in most cases, and there’s no outcome in November that anybody could say would be great for Democrats, except for barely holding onto the Senate.”

…it’s that the sight of Jay Carney saying something clearly and straightforwardly (and, frankly, accurately) is a kind of a new sensation for everybody. It’s like watching a moose tap-dance; theoretically it’s possible, but you still kind of have to stare.  I’d feel bad about being rude like that; but, hey, Jay Carney.

PS: I understand that it’s currently fashionable to manage expectations about the Senate.  Oh, who am I kidding? It’s always fashionable.  Win or lose, every two years it’s like clockwork.

Here is my latest At-Risk races… and there are DOOM calls. Hey, it’s Labor Day Weekend. Time to start in on that.

END_OF_DOCUMENT_TOKEN_TO_BE_REPLACED

Ooh, I wasn’t expecting stories like this until some time after Labor Day:

Link via RCP: the gist of it is that of course the Democrats will win back the Senate in 2016, because all of those young, hip, ethnically diverse voters will come out and vote for the Democratic candidate for Senator, right after they vote for whichever old white person the Democrats nominate for President!

…Huh. Doesn’t have the same zing, when put that way. END_OF_DOCUMENT_TOKEN_TO_BE_REPLACED

Via Stephen Green: oh, how I love this RCP Senate average map. 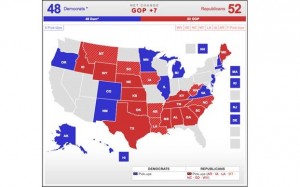 I might not love it so much if it hasn’t changed by October 21st, but for right now that’s a great map. Seven GOP pickups that don’t have Alaska, Colorado, and even maybe Michigan? And no Democratic pickups?  Yeah, I’ll take that at this stage of the election cycle.  After all, it’s not even Labor Day. END_OF_DOCUMENT_TOKEN_TO_BE_REPLACED

PS: Don’t wait by the phone.

President Obama on Tuesday threatened to veto a pair of Republican bills in the House which would delay the employer and individual mandates for one year in the Obama health reform laws, as GOP leaders pressed Democrats to break ranks with the White House on the issue.

The White House said Tuesday that President Obama would veto a House GOP bill to delay a contentious part of Obamacare for one year.

The House is set to vote this week on the Simple Fairness Act, which let Americans go without health insurance in 2014 without facing the tax penalty prescribed by the Affordable Care Act.

Almost 90% of the nation’s 30 million uninsured won’t pay a penalty under the Affordable Care Act in 2016 because of a growing batch of exemptions to the health-coverage requirement.

The architects of the health law wanted most Americans to carry insurance or pay a penalty. But an analysis by the Congressional Budget Office and the Joint Committee on Taxation said most of the uninsured will qualify for one or more exemptions.

END_OF_DOCUMENT_TOKEN_TO_BE_REPLACED

From a Hill article, discussing the Democrats’ current kitchen sink / spaghetti against the wall / Hail Mary play / spin the chamber and hope it’s the one without the bullet strategy they’ve adopted for the midterms:

…this is the first I’ve heard of it.  Me, the political junkie.  And if I haven’t heard of it, even to mock it – and, believe me, I would have mocked it if I had heard of it – then it didn’t succeed as an unveiling. END_OF_DOCUMENT_TOKEN_TO_BE_REPLACED

Writing stuff like this actually does no favors for Democrats…

President Obama has hit another low in another poll, but so have many of his critics in Congress.

The latest NBC News/Wall Street Journal poll gives the president an approval rating of 40%, a record low; Congress has a rating of only 14%, also a low.

…and this is why: it produces a false equivalence.  Democratic incumbents in trouble aren’t going to be happy to see Barack Obama showing up… but Republican incumbents in trouble – yes, there are some – weren’t going to get ‘Congress’ to come out to campaign for them.  They’d get specific (and popular) Republican politicians to do that.  I understand that you can’t really compare Barack Obama’s popularity against every member of Congress and not have the result be utterly cumbersome, but I think framing the discussion this way doesn’t really lead to correct conclusions.

END_OF_DOCUMENT_TOKEN_TO_BE_REPLACED

The 2014 election is likely to give us many more moments of gut-wrenching agony and Democrats going all Apostle Peter on the president they universally supported when elected in 2008. Members of the White House political team will grit their teeth and ask low-level campaign staffers if, you know, it would be OK for the commander-in-chief to show up. They will be told to call back in a few days. Often, they will be told, “No thanks, but send money.”

This won’t console the candidates, but they are not the first to find themselves trapped between their voters and an unpopular president. In 1998 and in 2006, both the second midterm years of struggling presidents, lots of candidates agonized over whether to let the most powerful man in the world land his plane near them.