I put this together as part of a 7th Sea competition; I wanted to get in on writing flavor text for the game. Alas, they did not decide to go with me.  Alas, alack, their loss. I mean, I’m being arrogant here, perhaps — but I rather liked this.  I think that you can figure out what’s going on, just by looking at what I wrote.

Gerard du Arrant sourly contemplated the scruffy, disheveled, and generally disreputable ruffian staring back at him in the hand mirror.  All in all, he mused, this new look of his failed to satisfy. Oh, the beard could pass muster — when not even an officer in a Musketeer’s regiment can attend to his toilet, then no man in the regiment could be fairly called dirty. And the dirt and the bandages had their own charms; they reassured the viewer that Gerard had done his duty as a soldier, and never mind that this might come as a surprise to some, including of course Gerard himself.

The problem lay in the eyes. Those eyes disapproved of Gerard, and the braver he grew in battle the more they disapproved of what happened after the fighting ended. The Musketeer conceded that those eyes had a point. A soldier killed the enemy; very well, that happened. A soldier might find it necessary to kill foreign peasants; such things also happened, but a decent man would see to it that they happened as rarely as possible. But to kill your own peasants? Even at l’Empereur Alexandre’s express orders? By what right did Alexandre have to order that?

And, more to the point: by what right did l’Empereur have to expect Gerard du Arrant to play bandit by hanging farmers?

END_OF_DOCUMENT_TOKEN_TO_BE_REPLACED

Yeaah this one I need to clear with my wife first. Or maybe get my  7th Sea gaming group to help pony up for it. I think that The War of the Cross will be worth the hundred bucks, but: well, you know how it goes.

It’s all very nice. On the 7th Sea side: the GM screen, and a box. END_OF_DOCUMENT_TOKEN_TO_BE_REPLACED 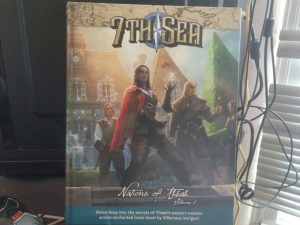 Thankfully, all three of my players in my current campaign come from countries featured in 7th Sea Nations of Theah (Volume 1), so I can use this one right away.  It’s a little weird, though: no Fire Sorcery at all in Castille, as far as I can tell.  It didn’t seem that unbalanced in the previous editions. And the Finnegan school — my beloved, beloved, infinitely broken Finnegan school* — of Drunken Master bare-knuckled boxing has been quietly killed off and replaced with a new background and a couple of admittedly not-too-bad advantages.

END_OF_DOCUMENT_TOKEN_TO_BE_REPLACED

It was an interesting time, although we’re all going to have to look more closely at the rules.  I also probably should make sure that the Villains have more dice in their pool to do Villainous stuff. Well, that’s how you learn.

If you’re interested: the major thing that we took away from 7th Sea combat is that it’s a bit more abstracted, or at least that we were treating it as abstracted.  It was very easy to jump about and shift focus, which is fine if you’re used to actually roleplaying and improvising dialogue. If you’re more of the ‘I hit him with my weapon for 1d8 damage’ school of gaming then you might find it less intriguing.

All in all, I think that the combat system works, but it’s not very intuitive. We may end up coming up with significant numbers of house rules.  Which, hey, is just what we all did with first edition 7th Sea!

Just in time, too: there’s a Villain in there that will be useful for the game I’m running now.  Alas, it does not have the writeup of my wife’s character in it, but it’s early days yet. Nowhere near soon enough to even thinking about grumbling..

Finally. Basically, it’s a format for making your own 7th Sea material and, hey, selling it (you get 50% of any profits, John Wick gets 25%, DriveThruRPG gets 25%).  This is acceptable, given that John Wick’s also made a bunch of free stock stuff available for people who want to do this, including maps, pictures, coats of arms, that sort of thing.  I gotta sit down with my gaming group (we’re in the middle of a 7th Sea campaign) next session and really TALK about this.  This may change how we run games for a while.

The PDF for Pirate Nations just dropped.  It’s not yet released to the general public, but if you backed the Kickstarter above $40 you should be getting a copy.  On a personal note… this isn’t the one that immortalizes my wife, alas.  Not that her character was a pirate.  Her character punched pirates.  Until they were good, or at least quiet.

…and it seems to have stalled a bit.  Which is a problem, because I’d really like to play a 7th Sea videogame. So I ask all y’all to consider Voyage of Fortune’s Star. It looks nifty.

Quarter of the way there. I REALLY want to play Voyage of Fortune’s Star, so I’m reminding folks of the Kickstarter.  It’d be cool!  You’re cool too, right?