Why is it so difficult for a Democrat to admit that he or she voted for Barack Obama?

That’s a rhetorical question, of course. What’s not rhetorical is the question: will the Democratic party do anything about this?  After all, when Alison Grimes did pretty much the same thing the Democrats cut her loose and left her out to dry. But I suspect that they will not do this to Michelle Nunn, and here’s why… END_OF_DOCUMENT_TOKEN_TO_BE_REPLACED

How much money did the Democrats spend on this one, again? – Because I bet that, say, Bruce Braley wouldn’t have minded getting some of that.  Or Mary Burke.  Or Greg Orman, later this month:

U.S. Senate candidate Alison Lundergan Grimes is lying about her support for the state’s coal industry according to Kentucky Democrats, including members of her campaign team, who were captured on a hidden camera video.

The video, produced by conservative filmmaker James O’Keefe, shows five employees of the Grimes campaign and local Democratic Party affiliates speculating that the Democratic challenger to Senate Minority Leader Mitch McConnell (R., Ky.) is only professing her support for the industry out of political expediency.

Oopsie.  I am amazed that there are people still in this business who will step on their own candidate’s message like these people did: END_OF_DOCUMENT_TOKEN_TO_BE_REPLACED

I think Mitch McConnell is going to be fine in this election.

What did I do to deserve this wonderful addition to the video archive? https://t.co/ihSR42CKJc #KYSEN

And you can blame that squarely on Obamacare, actually. The fact that they had to force every Democratic Senator to vote for that piece of garbage in order to get it to pass has been nicely counteracting the “But I’m independent!” line that Democrats love to fall back on. …No, folks, they are not. When push comes to shove, a hypothetical Senator Grimes would sign off on whatever gun control bill Harry Reid would put in front of her. Or anything else, really.

There is no such thing as a conservative Democrat. They’ll betray you, every single time. Sure as day, sure as night.

Look, I’m not telling you to love Mitch McConnell; but this was a really stupid thing for Alison Grimes to say.

As foreign policy inches its way into a debate that has largely focused on the economy, Grimes was asked about congressional efforts to aid Israel’s missile defense system, known as the Iron Dome.

“Obviously, Israel is one of our strongest allies in the Middle East, and she has the right to defend herself,” Grimes said. “But the loss of life, especially the innocent civilians in Gaza, is a tragedy. The Iron Dome has been a big reason why Israel has been able to withstand the terrorists that have tried to tunnel their way in.”

END_OF_DOCUMENT_TOKEN_TO_BE_REPLACED

[*”… in order to get the candidate out of the Kentucky Senate race.” As noted elsewhere, the title was a little clumsy.]

Like Jim Geraghty, I don’t expect that this story will go anywhere – Democratic primary in a Democrat-controlled state with a Democrat in the White House to quash an investigation on the federal level and a former Democratic Senate candidate as Attorney General to quash it in-state – but, man.  Democrats do not play nice in Kentucky, do they?

The Republican Party of Kentucky plans to ask a U.S. attorney Monday to investigate claims made by former Democratic U.S. Senate candidate Ed Marksberry that he was offered future favors to drop out of the race against Alison Lundergan Grimes.

END_OF_DOCUMENT_TOKEN_TO_BE_REPLACED 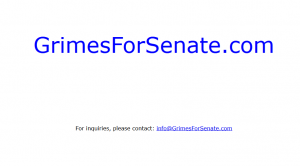 Yeah, that’s the entire site, as of noon, 07/02/2013.  And before you tell me That can’t be her real campaign site let me just note: if Alison Grimes does have a website then it’s less visible than this one.  The woman is running for US Senate in Kentucky; you’d expect that she would not have started her election campaign off without even having the ability to collect donations online.  And that point is kind of important: I’ve seen some people argue that Grimes sat out the last fundraising quarter in order to be properly prepared for this one.  Well… END_OF_DOCUMENT_TOKEN_TO_BE_REPLACED