This actually should not surprise anybody.

END_OF_DOCUMENT_TOKEN_TO_BE_REPLACED

Since someone was asking. 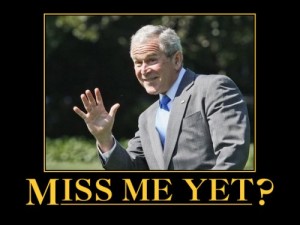 But let’s be more cheerful, shall we? Here’s 6 Movie Plots Made Possible by Bafflingly Bad Decisions. I have to say: Cracked.com has a clever model for posts.

Remember: nothing prior to 01/20/2009 is REAL to these people.  And that includes all the fools that they encouraged to go mad for the Democrats’ political benefit.

You hear in this debate, you hear analogies, you hear references to, you see pictures about and depictions of individuals that are truly stunning, and you hear it all the time. People — imagine five years ago somebody comparing health care reform to 9/11. Imagine just a few years ago had somebody walked around with images of Hitler. Hopefully we can get back to a discussion about the issues that are important in this country that we can do so without being personally disagreeable and set up comparisons to things that were so insidious in our history that anybody in any profession or walk of life would be well advised to compare nothing to those atrocities.

Be grateful that the Washington Post is at least catching up to the rest of us.

In his inaugural address, President Obama proclaimed “an end to the petty grievances and false promises, the recriminations and worn-out dogmas that for far too long have strangled our politics.”

It hasn’t taken long for the recriminations to return — or for the Obama administration to begin talking about the unwelcome “inheritance” of its predecessor.

…mostly because it would imply that there was ever a time when this administration didn’t take that stance. Even the article itself doesn’t really support the title, as it admits a good ways in that President Obama started off on blaming the previous administration for its ills on or about January 26th. What’s been happening since then is much more accurately described by what was apparently the original title of this piece, which was “Obama Sharpens His Reminders That He Inherited Fiscal ‘Mess’ From Bush.” This also makes the ludicrous assumption that no blame accrues to Democrats for our financial meltdown – but at least that title doesn’t pretend that this is any sort of new behavior on Obama’s part. END_OF_DOCUMENT_TOKEN_TO_BE_REPLACED

Stop bitterly laughing like that.  You’ll scare the kids.

(Via Hot Air Headlines) This is in the context of mentioning President Obama’s recent military speech, and in the context of discussing the fairly obvious – to people with functioning neural tissue, at least – points that the President is coasting on Bush’s successful surge strategy; and that our failure to actually have an ambassador to Iraq at the moment is, put simply, dumb. With that out of the way, Brose went on to ask the President to at least note the victories of the previous administration. Brose did not also ask for a magical elixir that would cure cancer, warts, and the galloping staggers, although I’m not sure why. He didn’t stand that much less of chance of getting it (bolding mine):
END_OF_DOCUMENT_TOKEN_TO_BE_REPLACED