The list itself is OK, although I quibble that Captain America: The First Avenger is ranked too low. But while I agree that this is the best bit in all the films…

END_OF_DOCUMENT_TOKEN_TO_BE_REPLACED

Anyway yeah, when I was a kid we had some like, Avengers pinball machine with Cap[*] on it at the Rec Centre and it would always run that “Winners don’t do drugs” PSA all 90′s arcade games did. And it was like “Is this really the best character to attach this message to…?”

Of course, I am now having difficulty with the thought that there are adults out there who think of the Nineties as ‘when I was a kid.’

(Video via the WFB)

Directors Joe and Anthony Russo want you to know this isn’t your average popcorn comic book flick, the battles and bluster and bad guys notwithstanding. Rather, they’ve made what amounts to the biggest-budgeted paranoid thriller of all time.

I like 1970s paranoid thrillers, you see. A lot of them still work as movies, forty* years later. I sat down to watch Three Days of the Condor and The Boys from Brazil a few years ago as part of a deep dive into 1970s cinema (blame Damnation Decade), and it was fun: in fact, I should go ahead and finally watch Marathon Man tonight.  I’ve been meaning to.  So I’m happy to hear that we’re getting a big-budget example in the genre.

Ever so slightly worrisome.

Hollywood has a real internal problem with being able to simply accept the concept behind a Captain America, without sneering at it. They can overcome it, but it’s just not natural for them.

END_OF_DOCUMENT_TOKEN_TO_BE_REPLACED

I’d buy this and put it on my wall. 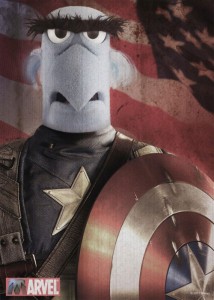 As God is my witness, I have no idea how I missed making The Right Stuff Movie of the Week.  I’m still not entirely certain that I did miss it; I didn’t see it, but that doesn’t mean anything.  Ach, well, even if I did it’s so good it should be on the list twice.

And so, farewell to Captain America: The First Avenger.  Which was also so good it should be on the list twice (ask me again in a year whether I still think so, of course).

I loved Captain America: The First Avenger when it came out, particularly for this exchange:

Red Skull: What makes you so special?
Captain America: Nothing. I’m just a kid from Brooklyn.

And so, adieu to X-Men: First Class.  Which I also quite liked, for different reasons.

And on the Captain America and X-Men: First Class movies, no less.  Will wonders never cease?

…No, seriously, it’s readable (don’t agree with it all, but it’s readable).  Some interesting bits there on the entire mutant thing being a metaphor for the inability of minority groups to integrate into larger American society – and how it’s in marked contrast to the Captain America movie, which is all about how anyone can be initiated into the glories of the American Dream:

What really drives the Red Skull nuts is the idea that it’s not that Captain America is great, but the institutions that made him and the things he stands for. “Arrogance may not be a uniquely American trait, but I must say, you do it better than anyone,” he says, demanding, “What makes you so special?” expecting an answer he can laugh at or bat away. “Nothing, I’m just a kid from Brooklyn,” Rogers tells him, provoking an attack.

I can’t really argue with that (I also can’t argue that the Marvel Universe’s WWII US Army was blatantly a damn sight better-integrated than ours was, given that I was raising a pleased eyebrow at that historical revision myself).  I must not be feeling well.  Or possibly the writer (Alyssa Rosenberg) is simply essentially sound on superhero movies.

Well put together, good origin story, decent feel for the period, good actors who understood their jobs, appropriate appreciation of the tech involved, and a refreshing lack of modern political shibboleths.  Cap was there to kick a ferocious amount of Hydra ass, and much Hydra ass was accordingly kicked.

Overall: between Iron Man and Iron Man 2 in quality*.