Hey, tell me again just how much of a drag Clint Eastwood was on the Republican party:

Yup, so much of a drag that American Crossroads will be running that ad in “Colorado, Florida, Iowa, Nevada, New Hampshire, Ohio and Virginia.”  But, Moe! – I hear you cry?  Aren’t those swing states? Why, yes, they are – although by my count the ad’s superfluous in at least three of them.  But that’s OK: never hurts to make sure, and it ain’t Romney’s money.

PPS: “Grin with a body behind it.”  Nailed that one, too.

(Via Instapundit) I don’t know about the rest of you, but I find this reassuring.

Eastwood’s appearance at the convention came after a personal request from Romney in August, soon after Eastwood endorsed the former Massachusetts governor at a fundraiser in Sun Valley, Idaho. But it was finalized only in the last week before the convention, along with an agreement to build suspense by keeping it secret until the last moment.

Meanwhile, Romney’s campaign aides asked for details about what Eastwood would say to the convention.

“They vett most of the people, but I told them, ‘You can’t do that with me, because I don’t know what I’m going to say,’” Eastwood recalled.

That’s pretty much it.  With one last taunt: man, but those folks in Charlotte really kind of avoided mentioning Clint Eastwood a lot in prime time this week, huh? 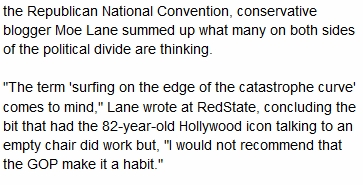 I would have linked – heck, I would have put it on RedState – except that they didn’t bother to link to [us]. Freaking amateurs.

First off, here’s the video of the speech:

…and I recommend that you watch it if you haven’t, already.  Executive summary: it was successful, but at the same time highly surreal. END_OF_DOCUMENT_TOKEN_TO_BE_REPLACED

Mostly because I’m going to go rent it now. So, we say goodbye to Forbidden Planet

, and say hello to Gran Torino

, which will probably be Clint Eastwood’s last significant feature film.

Wow. I grew up watching this man.