And it looks pretty bad.  Basically, the Democrats have the usual “their demographic groups don’t turn out in midterms” problem; and there’s no indication that they’re doing anything effective in reversing that for 2014.  Or, more accurately, there’s no indication that Barack Obama is doing anything effective in reversing that for 2014, largely because he doesn’t really care.  “I won,” remember?  That’s the motto of this administration, first, last, and always.

END_OF_DOCUMENT_TOKEN_TO_BE_REPLACED

There’s been a bunch of predictive 2012 maps being thrown around today, so let’s look at one that is more an examination of trends at the moment.  The latest Cook Report survey has the current estimated Electoral Vote breakdown for 2012 as follows: 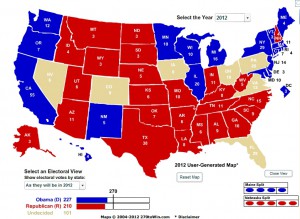 In other words – and contrary to a lot of agitprop, on both sides – it’s game on, and we’re going to be fighting it out in the swing states again.  Cook has the toss-up states as being Colorado, Florida, Iowa, Nevada, Ohio, Pennsylvania, and Virginia: notice that all of these states are ones that Barack Obama won in 2008.  Also note that, of the seven states, only Colorado and Nevada has been really friendly territory for Democrats lately on a state level:

Virginia has a tied Senate, with the Republican Lt. Gov having the tie-breaking vote.  But that more or less doesn’t matter; what matters here is that when Obama campaigns in 2012 he will not be getting the same welcome in, say, Ohio, Pennsylvania, and Virginia that he did in 2008.  Of less, but still significant, interest is that Obama’s path to victory requires him to run the tables; we reapportioned EVs between 2008 and now, and largely at the Democrats expense.

And here’s the practical application to all of the above: which is to say, the Republican path to victory from the Cook baseline. 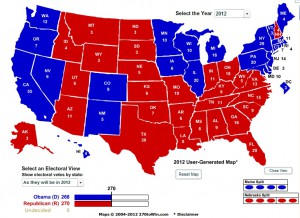 Essentially: Florida, Ohio, Virginia, and have a nice day.

This can be done.

Cook’s put up their first assessment of the 2012 election battlespace.  It’s reasonable, given the large number of Republican freshmen Congressmen this cycle:

Still, don’t get too attached to these numbers, though: this is all pre-redistricting.

(All names in parentheses are of GOP challengers, of course.  Both because I have no interest in helping Democratic candidates and because Cook has been a not-quite-monotonous constant drumbeat of good news for the GOP lately.)

Consistent with things continuing to slide off of the beam for Democrats this year, in other words.

Individual race analysis is telling him 40+ lost in the House and the national totals are even better.  Well, better from a certain point of view, which is not one currently shared by the Democratic party.

How bad is it?  This bad: END_OF_DOCUMENT_TOKEN_TO_BE_REPLACED

Charlie Cook is bearish on the thought of the GOP retaking the Senate this year – which, I should note, is a large step up from, say January 2009: back then they were talking about how the Democrats might increase their existing majority in 2010.  Charlie sets up the current situation as follows:

Three open seats currently in the hands of Democrats seem pretty likely to end up in the Republican column this year. Sen. Byron Dorgan’s seat in North Dakota is a goner. Democrats have strong candidates in Delaware (Chris Coons) and Indiana (Rep. Brad Ellsworth), but the strength of the opposition in the former and the toughness of the state in the latter means these Democrats, who might have won under other circumstances, are likely to come up short this time. Watch for both to resurface.

To score a net gain of 10 seats, Republicans would also have to sweep the seven Democratic seats that the Cook Political Report rates as Toss-Ups, taking open seats in Illinois and Pennsylvania and defeating incumbent Sens. Blanche Lincoln in Arkansas, Barbara Boxer in California, Michael Bennet in Colorado, Harry Reid in Nevada and Patty Murray in Washington. If the GOP came up short in one of those, they would have to make it up by carrying one of the two additional vulnerable Democratic races, claiming the open seat in Connecticut or beating Wisconsin incumbent Russell Feingold. Both of those races are competitive as well.

Here’s the basic problem.  Pick any one of those races listed above, and you can see how the Republican can win.  The trick is winning all of them, or at least ten of them* – statistically speaking, that’s a bit of a stretch.  Said stretch is modified by the fact that the results are not really dictated by random chance, but even so we’ll still have to count on everything breaking our way. END_OF_DOCUMENT_TOKEN_TO_BE_REPLACED

…and the reason that you can tell that they’re worrying is because everyone on that list commissioned a poll in the last three months of 2009. Reid explains why this is interesting:

Some political professionals advising their clients have told them to hold off conducting polls until this 3-month period, when the health care debate calms down. Dems saw a demonstrable drop in support during the final half of the year, thanks to health care, and polling during such a turbulent time gives unnecessarily worrying, or inaccurate, results.

Which last may or may not be true; but it still begs the question why these fourteen are worrying. Aside from the fact that they’re all in competitive districts.  And that all but one of them is in a race rated as competitive.  And that more than half of them are already at serious risk of losing their jobs.  And that it’s turning out to be a bad year to be an incumbent Democrat.  Other than that, no worries, yes?

Yes, ‘worry’ is an interesting word, ‘isn’t it?  It originally meant ‘to strangle,’ you know.

The DCCC’s cash advantage is, at the moment, an important circuit breaker for 2010. For all the factors that point to big GOP House gains, it is the cash disparity could mean the difference between a bad year for Democrats and a really bad year.

At this rate, by June we’ll be hearing how the DCCC’s cash advantage will at least keep the GOP from having enough votes to override Obama’s vetoes next year.

PS: Do I seem insufficiently anxious and resigned to failure? Well, it might be because I know a trend when I see it. Or maybe it’s because I’m currently on the right side of a 4-to-1 seat defense ratio. Or maybe it’s just that we watched the Democratic party pour quite a lot of money down a hole in Massachusetts.

PPS: More serious question: does the Citizens’ United case make monthly looks at fundraising totals more or less irrelevant? It just got a lot easier to fund promising candidates, on both sides.

PPPS: In a truly just world, there would be another announcement of a Democratic retirement this morning.

Looking at the Cook Political Report’s latest competitive race chart is in itself informative – the short version is that of the top 108 competitive races, the following ratios apply:

…but there’s some interesting things that can be seen with a little sorting.  Below is a chart of competitive seats, sorted by Cook Partisan Rating: