Either that, or all the boxing Harry Reid did is starting to catch up with him.  Your call.

Harry Reid: Being on the wrong side of Dick Cheney is being on the right side of history

And let’s be honest: it’s entirely possible that Harry Reid actually does have a problem with homosexuality. It’s just that he belongs to a political party that ruthlessly enforces uniformity of thought on that topic. Which is a shame, really; doing that doesn’t stop people from crimethink. It just teaches them to hide it well. Fortunately, Dick Cheney and I belong to a party that is far more sensible about its heretics…

Charity of Cheney’s choice. To riff off of Allahpundit’s style:  Make this happen.

Suspense this morning on “Fox News Sunday”: Will Dick Cheney seize the opportunity to pull off one of the great trollings in modern political history by claiming that even he thinks Obama’s NSA surveillance has gone too far? I’m praying the answer is yes, simply for the comic agony it would induce in O-bots, but it’s almost certainly no.

But it would be so. Totally. Worth. It. END_OF_DOCUMENT_TOKEN_TO_BE_REPLACED

As in, What Would Cheney Do? …in relation to our current President and relentlessly conventional response to the current choppy waters. Politico notes that there’s another way. The Way Of Cheney.

The former vice president, through years of public statements and internal deliberations during the Bush administration, fashioned a distinctly different school of thought about how to operate in the midst of a Washington storm.

That philosophy, in a word: defiance.

What would Cheney do is not a question, to put it mildly, that Democrats are prone to asking.

I don’t think that Politico is really asking the question, either: if you get to the end you’ll discover that their actual advice is Start kissing up to the Beltway crowd there, Barry.  Which is… actually not bad advice; but mostly because Barack Obama couldn’t credibly imitate Dick Cheney on Obama’s best day and Cheney’s worst.  There’s something that our British cousins call ‘bottom:’ as far as I can tell, it kind of means guts, kind of means determination, kind of means political courage, and kind of means consistency.  Cheney has it.  Obama doesn’t.

Which is not a – well, sorry, but it is a personal flaw.  Can’t help that.

Dick Cheney gets to the point, ladies and gentlemen:

“The performance now of Barack Obama as he staffs up the national security team for the second term is dismal,” Cheney said in comments to about 300 members of the Wyoming Republican Party.

So it has, so it has.  The funny part? It’s really hard for the Left to argue that Obama’s doing great without them also having to argue for, you know, drone strikes and extraordinary rendition and kill lists.  They’ll do it, because they’ve got nothing else left to them at this moment, but every time they do another bit of their souls ablates off.

[UPDATE: I have no idea why the last wave of editing didn’t go through before publishing. Fixed.]

I understand that Ta-Nehisi Coates had to pad his word-count for this NYT piece – executive summary: Coates’s desire to remain true to his principles, such as they are, are apparently subordinate to his desire to see Barack Obama act out towards Republicans.  This bothers him enough to whine about it, but not enough to actually do anything to try to stop Obama from acting in such a fashion – but there are two points I want to make, if only for my own peace of mind’s sake (because God knows that Coates never, [ever] listens to anybody else besides himself):

Other than that, the article is… well, pretty stupid, actually.  Those two things I mentioned above were just the clumps of stupidity that managed to float to the top.

The representative from Arizona, on civility levels these days:

“Not even in our worst days as Democrats did we demean and attempt to cripple the office of president.”

…sayeth the man who cosponsored articles of impeachment against then-Vice President Dick Cheney.  In early 2008, no less, which means that Grijalva had no better motive here than to try to take a cheap shot against the President.  By proxy.  When it was already clear that when it came to this particular subject Bush was right, and Grijalva was wrong.  And if you don’t believe me, go ask President Obama, who has c0ntinued the war policies* that Grijalva wanted to impeach Cheney over.  You won’t get a straight answer from Obama, mind – but then, when did we ever?

We will now pause while various antiwar faction members try to claim that attempting to impeach the Vice President should not be seen as an attempt to “demean and attempt to cripple the office of president.”  I’d say forgive them – after all, at this point this is all that they have – but I find that I have very little forgiveness in my heart for people who’d happily throw any number of non-Westerners onto the pyre, just to win an election…

*If not quite as competently.

…by Dick Cheney will make some heads explode.

Maybe I’ll pick it up then. If I do, it’ll be on Kindle: it’s just easier for me to read political books that way.

END_OF_DOCUMENT_TOKEN_TO_BE_REPLACED

Happy birthday to you.

Happy birthday to you. 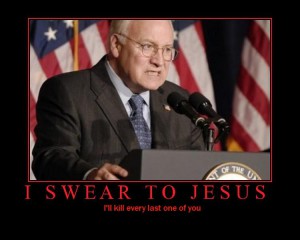 And may you continue to infuriate the more unhinged members of the American Left for decades to come.

While I agree with Allahpundit that the single unkindest cut of all would have been for Dick Cheney to criticize President Obama’s counter-terrorism policy from the left, that wasn’t going to happen.  Honestly, when it comes to that sort of thing the President – like virtually all contemporary Democratic politicians, really – still has to be graded on a curve.  It’s going to be a long time before that party is going to be comfortable with electing another Truman (unfortunately for the country, they’re probably capable of electing another LBJ a lot sooner), mostly because a critical generation of power brokers is only now reaching the point where its members are starting to die 0f old age.

Still, Cheney genially praising Obama for showing the elementary good sense to follow George W Bush’s lead on the GWOT is pretty good stuff.  My only quibble there is that the former Vice President didn’t observe that the current President had really ‘grown in office’ in that regard; but then, that can be a killing insult, inside the Beltway.  The doctors probably told Cheney to take it easy until he’s more comfortable with his cyborg body*… 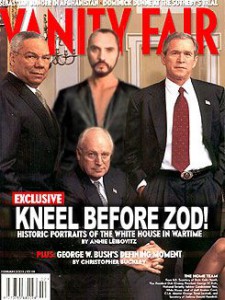 …or else he’ll sic Dick Cheney on you*.

…beats me.  I’m just in that kind of mood.  This probably sparked it off.

*Don’t think that the President wouldn’t make the trade RIGHT NOW if it was somehow offered.