Plumcake of Manolo for the Big Girl – which is a fun read, by the way – has a post up on Disney Villainesses; it features Ursula of The Little Mermaid

(which is apparently everybody’s second favorite Disney film).  Plumcake, alas, had to give Yzma an honorable mention on account that she wasn’t really scary; which is true, but irrelevant.

It is a measure of the deep, deep respect that I have for a certain corporation’s legal department that I am refraining from reproducing the image associated with this article:

In this Disney dystopia, Snow White has been renamed “Ho White”, while the loveable dwarves Sleepy, Happy and Doc are rebranded Filthy, Smarmy and Randy – supposedly to represent different types of drinkers.

I recognize that it takes a certain amount of suicidal bravery to live in Australia – the native fauna Just Doesn’t Like the rest of the global ecosphere – but this is impressive, even for them.

Via Drudge – and he didn’t put up the image, either.

(Via Nodwick) Yes, you saw that right. 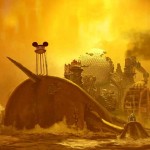 More great-googley-moogley pictures at the link.  I’ve been holding out on the Wii

– it’d probably wreck my blogging schedule for a while – but [when] this comes out?

For four billion dollars, or about eight or so Iron Mans.

Which is moderately geeky of me, and hopefully a sufficient warning to DC Comics.