Last month, when the Bureau of Economic Analysis announced that gross domestic product had grown at a lead-footed rate of 0.1 percent in the first quarter, economic analysts could focus on two pillars of hope. The first was that the winter weather was unusually awful, and first-quarter growth probably reflected that. And the second? This was a very preliminary number, and it seemed reasonable to think that it might be revised upward.

The operative word is “seemed.” Now the BEA has provided its first revision, and things only get more dismal: The economy actuallycontracted in the first quarter instead of just lying down on the sofa and feeling all mopey and sad. Key areas of decline were exports, inventories and nonresidential fixed investment. In other words, whatever happened was happening on the business side.

Megan McArdle is not yet ready to say that we’ve hit the iceberg, and that’s fair: after all, it’s not OFFICIALLY a recession until the economy contracts two quarters in a row.  Then again, even if the economy does contract two quarters in a row it still may be a while before we ‘officially’ call it a recession, if you know what I mean (and I think that you do). One of Megan’s points here, though, is that the situation is sufficiently bad that the economy just doesn’t have any margin any more.  Essentially, we’ve been drifting into iceberg-infest waters for some time now.  Will one hit? Will we miss them all?  I don’t know! Neither do you!  And certainly, neither does the President!

PS: This is one reason why we like to have people with actual executive experience run for President. A governor may or may not know how to fix a problem – see pretty much every Democratic governor in America for examples – but at least he or she understands the parameters of it.  In contrast, Barack Obama is still peevishly waiting for the person to come in and tell him what he has to do while the real experts fix things.  At least, that’s how it’s always worked in the past.

Interesting analysis here from Sean Trende, especially at the end:

If the president’s job approval is still around 43 percent in November — lower than it was on Election Day in 2010 — the question would probably not be whether the Democrats will hold the Senate, but whether Republicans can win 54 or 55 seats. Given the numbers right now, that should not be unthinkable.

But there’s a flip side to this. If Obama’s job approval does bounce back — which is exactly what happened in 2012 — there’s a reasonable chance that Republicans could walk away from this cycle with just a handful of pickups.

END_OF_DOCUMENT_TOKEN_TO_BE_REPLACED

After a while you almost get numb.

…Obama told CNBC’s John Harwood that Wall Street should be far more panicky about Republican efforts to use the debt ceiling to win concessions from the White House. I don’t blame Obama for being annoyed with Republicans for trying to use the debt ceiling the exact same way he did when he was a senator. But normally a sitting president doesn’t try to talk down the economy just to win a political point.

END_OF_DOCUMENT_TOKEN_TO_BE_REPLACED 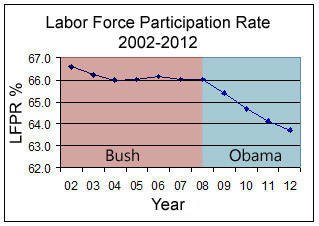 END_OF_DOCUMENT_TOKEN_TO_BE_REPLACED

I think that I can taste just the faintest touch of bitterness in this article:

When Mr. Ryan returned to Capitol Hill last week, he was met with a standing ovation from his Republican colleagues, a bear hug from Mr. Boehner and the hope from conservatives that he would hold the line on taxes and other spending.

According to aides and others close to Mr. Ryan, he is as focused on doing the job before him as he was on winning the vice-presidential race. “We just sort of picked ourselves back up, and we are all back into our lives and jobs,” Tobin Ryan said. “And frankly, I see Paul doing the same thing.”

It always annoys the Left when people from our side indeed pick themselves up and dust themselves off.  We never wallow enough in despair to suit them, honestly.  END_OF_DOCUMENT_TOKEN_TO_BE_REPLACED

Let me summarize this Wonkblog post, mostly because the author* bent over backwards to avoid getting into the politics of it (sensible of her: it’s a pretty damning indictment of Obama):

Under Obama’s policies, the young (who want jobs) can’t find ’em; and the old (who shouldn’t need jobs) have to go looking for ’em.

But hey: let’s give the President four more years.  I mean, how dare we judge the man using the bourgeois, capitalistic, and possibly heteronormative-patriarchal-privileged ‘standard’ of ‘competence?’ Don’t people understand that the Left have issues to work out?

*I had started a Google search under ‘Suzy Khimm,’ on the off chance that I was maligning the author unfairly by assuming that she was a hardcore Lefty.  I stopped said Google search when I saw the phrase “was a reporter in the Washington bureau of Mother Jones.”

Via Instapundit, Walter Russell Mead looks at a New York bridge project, and… and I don’t really need to give you the background, do I?  It’s a bridge, it should have been built by now, and it’s not being built for precisely the reasons that you’ve already guessed:

Many environmentalists oppose the plan due to the environmental damage from the massive dredging operation that is necessary to build a new bridge. Other environmentalists support the bridge, but claim that a wider bridge without room for public transit would increase sprawl and lead to a higher carbon output. Local politicians and planning associations, meanwhile, have added their own lists of concerns to the pile.

These kinds of complaints are unfortunately all too typical of construction projects today. There are so many controversies, so many lawsuits, and so many competing interests that negotiations take an enormous amount of time and money. The time between planning a project and actually carrying it out stretches into decades. To those who bemoan the lack of “shovel-ready” infrastructure projects in America: this is why.

END_OF_DOCUMENT_TOKEN_TO_BE_REPLACED

(Via Hot Air)  Michael Tomasky, now that he is finished swallowing his gum from watching the Lightworker flail about like… someone who went from undistinguished state Senator to President of the United States in four short years, all the while learning not a darn thing… would like to offer the President a counter-narrative.

The story, in a nutshell, is this: we inherited a total disaster, things are getting better, and Romney will bring us back to disaster. The last part is the most important: putting the emphasis back on the challenger.

Because apparently not even the Online Left is willing to really pretend that this administration can be trusted to come in out of the rain.  But enough cheap shots and other innocent amusements: let’s unpack this argument.  Such as it is.
END_OF_DOCUMENT_TOKEN_TO_BE_REPLACED

Don’t get me wrong: I agree with the sentiment expressed by an unnamed McCain staffer today in regard to watching Team Obama trying to do damage control after the President’s disastrous commentary on the private sector – and possibly even more disastrous spin.

“We very much look forward watching Team Romney put Obama’s head in a vice over this,” he emailed “What goes around comes around, assholes.”

…I just want to know why the heck we didn’t see this attitude more, back in the day. And by ‘more’ I mean ‘at all.’

But I’m not bitter!