(H/T: Instapundit) The principle is fairly simple: Pileggi proposes that the state assign Pennsylvania’s electoral votes semi-proportionally: which is to say, two EVs would be given to the winner of the statewide popular vote and the remainder divided up proportionally.  Outside the Beltway did the back of the envelope calculations and concluded that the end result would have been 11/9 Obama/Romney, which explains why a: it’s being done and b: why the Left is screaming about it (oddly, almost nobody on the Left complained when Nebraska gave Obama an EV in 2008).

One thing that especially infuriates the Left about this is that plans to try this sort of thing are being advanced in states like Pennsylvania, Wisconsin, Ohio, Michigan  – which is to say, states where the GOP has control over the legislature and the governorships, but not the EVs statewide – but not in states like Texas or Georgia.  Because, after all, cheerfully naked partisanship is only acceptable when the Left does it.  I assumed that James Joyner of OTB knew that, but then he wrote “…maybe there should be Democratic proposals along those lines in states with a similar history of both being relatively close and yet always winding up in the Republican column?”  The answer to that is simple: there actually really aren’t any.  The closest is West Virginia, which Mitt Romney won in 2012 with 62% of the vote.  Obama didn’t win a single county in that state, let alone a CD: under Pileggi’s system he’d have gleaned one Electoral Vote out of WV. END_OF_DOCUMENT_TOKEN_TO_BE_REPLACED

It’s an interactive Electoral College map that is not-Flash, for those who prefer that sort of thing: has the added advantage of also having 2000 data. In fact, just take a look at the 2000 map: 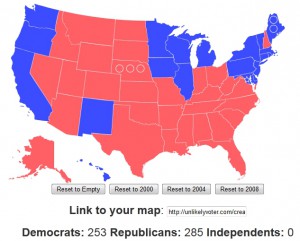 I could believe that that map could happen.  Also: note that in 2000 the actual EV total was 271-266.  Guess the Blue State model is encouraging a lot of people to vote with their feet.

As brought up here and here.  Anyway: