Erick being Erick Erickson, my friend and former RedState colleague. He had a bad episode involving blood clots in the lungs; fortunately, they were able to catch it in time. We at RS have been quietly worried about him for a couple of days now, so it’s a relief to hear that he’s mending.

Makes sense to me:

If Cruz and Rubio are too immature to stop fighting each other to attack Trump, we should force them.

If Marco Rubio is in first or second place headed into your state’s primary, vote for Rubio, even if you like Cruz.

In the same way, if Ted Cruz is in first or second place headed into your state’s primary, vote Cruz, even if you like Rubio.

The goal must be to first stop Trump.

Then we can hash it out between ourselves.

END_OF_DOCUMENT_TOKEN_TO_BE_REPLACED

…you can find a local station that broadcasts online here.  He’ll be on from noon to three PM, and hey: it got me to listen*, so there you go. Check it out.

*I just don’t read partisan political books or listen to conservative talk radio.  I got nothing against either, but I’ve never felt the need to do so.

Background to the letter here: short version is that my friend and RedState colleague won the Internet last week by creating a perfect parody of Meghan McCain’s frankly incoherent writing style.  It was so perfectly and wonderfully functionally illiterate, in fact, that McCain had her lawyer send out a cease-and-desist letter; too many people really and truly thought that she had written it, you see.

By the way, Meghan?  What the hell did the comma ever do to you, that you continuously torture it so?

Anyway, here’s the letter in question.  Take a gander at who it’s addressed to – which should tell you everything that you need to know about the intellectual capacity of Team Meghan.  Or its collective facility at doing research.  Or its inherent ability to come in out of the rain, apparently.

It’s hardly a surprise – Pawlenty has been arguing since January that automatically raising the debt ceiling without exhausting other options (read: spending cuts) first is a bad idea – but the video below shows that the former Governor of Minnesota continues to want Republican legislators to not back down on this issue:

As GOP 12 noted, this statement by Pawlenty…

Now is the time. The hour is late, and these problems are big, and the only way you’re going to get people to do something tough is to put their backs up against the wall.

…sounds a lot like what Erick Erickson was saying this morning: END_OF_DOCUMENT_TOKEN_TO_BE_REPLACED

I picked Red State Uprising: How to Take Back America this week because it was written by a buddy of mine (one Erick Erickson, who also happens to be the guy who runs RedState) – and no, I’m not getting paid to shill this sucker.  I wouldn’t mind being paid to shill it, so if you want to keep thinking that I am… then who am I to stop you*?

So, adieu to Blameless (The Parasol Protectorate)

: we’ll go back to non-political books next week.

A group’s got to know its limitations.

You may have noticed that a lot of the people being most virulent about Erick’s CNN gig are folks who don’t have, won’t have, and probably can’t have CNN gigs, or anything like that (the highest that they aspire to is to get on Maddow once) and it’s not unreasonable to assume that this probably bugs them. They’re in the Left-sphere, remember? Beyond a certain point, there’s no advancement; the activist Left have all the tame blogs that they need, thanks, and they’d prefer to develop the ones that they have than let new ones be created.

But if you’re in that position you don’t want to think about it, I suppose. I certainly wouldn’t, if I was in their shoes*. So they’ve told themselves that it’s because they’re too edgy for the MSM. Too in-your-face. It’s the price that they pay for keeping it real with their rough language and uncompromising style. So it’s OK, really; they can’t be blamed for being too hardcore for television. So when Erick gets a CNN gig, after calling David Souter a goat-f*cking child molester? Well, they can start screaming about the situation, or they can dispassionately admit to themselves that the real reason why they’re not on TV is because they suck.

You tell me which is a more attractive option to these people.

PS: Jim Geraghty was thinking along the same lines. Which you’d already know, if only you subscribed to his Morning Jolt… END_OF_DOCUMENT_TOKEN_TO_BE_REPLACED

As you’ve probably heard by now, my RS colleague/Dear Leader/most visible target (and friend) Erick Erickson has landed a nightly gig with CNN.  I’ve been saving my commentary for Twitter because you can pretty much take it as a given that I approve of this move by CNN and Erick, so why bother writing it out all formal-like?

But thanks to RS McCain’s article in The American Spectator, I do have something to note.  Specifically, Steve Benen of the Washington Monthly*, who came up with this gem:

This is easily the worst decision CNN has ever made.

Over the last dozen years I [former CNN Chief News Executive Eason Jordan] made 13 trips to Baghdad to lobby the government to keep CNN’s Baghdad bureau open and to arrange interviews with Iraqi leaders. Each time I visited, I became more distressed by what I saw and heard — awful things that could not be reported because doing so would have jeopardized the lives of Iraqis, particularly those on our Baghdad staff.

Via Transterrerstial Musings.  Not that this would really count, for the Online Left.  But I don’t feel up for another round of “Try to convince netrooters that non-Europeans are actually real” this afternoon.

*I should pretend that I take no enjoyment at comparing RedState’s and WM’s relative traffic positions, but… well, that would be a lie, lie, lie.

‘Ours/theirs’ referring to which side of the partisan political spectrum this, well, nutjob was on: 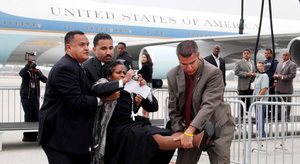 Reporter Dragged Kicking and Screaming From Near Air Force One

A reporter for a small newspaper was forcibly removed from a press area near Air Force One shortly before President Barack Obama arrived at Los Angeles International Airport to depart California early Thursday.
Airport security officers carried the woman away by the feet and arms as she protested her removal.

She later identified herself as Brenda Lee, a writer for the Georgia Informer in Macon and said she has White House press credentials. The newspaper’s Web site says it is a monthly publication and Brenda Lee column is posted on it.

Calls to the newspaper and the White House press office were not immediately returned.

It was a tough call: on the one hand, she was trying to apparently hand off a letter to the President asking him to support ‘traditional marriage.’  On the other hand, she was dressed as, and identifying herself as, a Roman Catholic priest.

And now you know why this story’s getting reported. END_OF_DOCUMENT_TOKEN_TO_BE_REPLACED