END_OF_DOCUMENT_TOKEN_TO_BE_REPLACED

Basically, Glenn called this objection by Nate Silver with regard to Vox’s habit of stealing stuff ‘When nerds call out nerds.’  Look, I have had my differences with Nate Silver – but he’s the only nerd in this fight.  Ezra Klein doesn’t deserve that honorable and venerable title.  You need to care about something, to be a nerd.  You need to care about something so much that an attack on it is an attack on you. And that your sense of integrity will keep you from allowing that thing to be abused.

I believe that Nate Silver has those things. I do not believe that of Ezra Klein. And yes, I’m making a moral judgment, here.

He can also spare the rest of us the passive-aggressive racialist shi… stuff. 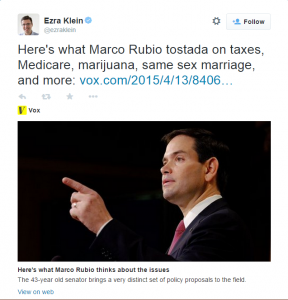 Makes you wonder what that site’s balance sheets looks like.

This is the kind of backhand that uses the hand that wears the most rings. Because chipping a tooth is the goal.

END_OF_DOCUMENT_TOKEN_TO_BE_REPLACED

Ezra Klein, an analyst, columnist and pundit who runs The Washington Post’s Wonkblog, will leave the newspaper, taking two of his colleagues with him, according to an internal memo sent on Tuesday.

Mr. Klein is “looking to start his own news organization,” according to the memo, but his destination was not identified. He declined to comment on the matter when reached by email on Tuesday, but said he had not “signed anything with anyone.”

END_OF_DOCUMENT_TOKEN_TO_BE_REPLACED

More to the point: why did you think that Jeff Bezos was going to give you at least ten million dollars?

Mr. Klein, who quickly ascended into the ranks of the Washington media establishment with a multiplatform blend of policy nuance and number-crunching on Wonkblog, approached Katherine Weymouth, the Post’s publisher, in recent weeks, the people said.

After consultation with the newspaper’s editor, Marty Baron, according to one of the people, he put forward a proposal with detailed revenue projections to build a new website dedicated to explanatory journalism on a wide range of topics beyond political policy. It would have been affiliated with The Post, the person said, but would have been a separate enterprise. The investment he sought, the person said, was in eight figures.

Ms. Weymouth and the paper’s owner, Jeff Bezos, declined to support the project.

END_OF_DOCUMENT_TOKEN_TO_BE_REPLACED

Because I refuse to believe that he’s this dumb:

If these people aren’t up to the most important tasks of Obama’s second term, why haven’t they been fired and replaced by people who are?

These people being Kathleen Sebelius, Rob Nabors, and Miguel Rodriguez: three executive branch officials who have utterly screwed up their jobs, even by the generous standards of the Obama administration*.  But, fine: I’ll play along.  The reason why Barack Obama has not fired these people is because Barack Obama built his career by stroking the guilty egos of people like Ezra Klein.  Obama based his career on being, well, perfect. END_OF_DOCUMENT_TOKEN_TO_BE_REPLACED

And not a particularly romantic war, at that. This is tantalizingly half-promising to end up being a real blood-and-filth-in-the-mud, Thirty-Years-War-style kind of conflict.

Wonder who will end up being on which side.

PS: Although surely the grownups in the room will keep the two wings of the Democratic party – and may God forgive me for using this term – ‘elites’ from savaging each other too deeply.

Well, here’s something ironic for you.  Ezra Klein, after writing this laudably honest admission about policy responses to atrocities like the Newtown mass murder:

I’ll tell you what scares me: I don’t think we know how to prevent a tragedy like the Newtown massacre. The more information that emerges on the killings, the less effective any of the potential policy remedies appear to be.

…and listing some of the most common rhetorical arguments, pros and cons, Klein then promptly brings up the thought of seeing if there’s a way to restrict handgun purchases… despite the fact that nobody at Newtown was murdered with one.  In fact, he’s pretty explicit in trying to come up with a way to generalize a response to the aforementioned atrocity.  And they wonder why pro-2nd Amendment folks don’t trust anti-gun Democrats…