James Taranto makes an excellent point about the major problem with proposals to expanding who can request a background check on firearms:

Currently access to the FBI’s background check system is limited to licensed firearms dealers, who have an incentive not to abuse it lest they lose their license. If it’s opened up to all prospective sellers of guns–that is, to everybody–what’s to prevent someone from abusing it, say by requesting a background check on Greg Sargent, who presumably has no interest in acquiring a gun?

The system only gives a yes-or-no answer as to whether the putative buyer is eligible to own firearms under federal law. But if you’re looking to dig up dirt on someone, a “no” answer on a firearms background check would give you a nice clump of it.

END_OF_DOCUMENT_TOKEN_TO_BE_REPLACED

Greg Sargent, whining about how those awful judges were so mean to those nice Obamacare arguments.  It takes a special kind of brain to consider a position that 2/3rds of the country holds ‘hard-right,’ and to think that a particular argument is ‘beneath contempt’ when it’s potentially being taken seriously by a working majority of the people that you absolutely need to convince*.  Fortunately, Sargent has that brain.

Via The Volokh Conspiracy**, and frankly Jonathan Adler’s being a lot less cruel to these people than I am.  Then again, he probably has to deal with them on a more regular basis than I do.  That’s not meant as a slam; it’s not Adler’s fault that I have less constraints on my speaking than he does.

So look for [Obama] to seek the moral high ground by calling on Republicans to meet him on some sort of ideologically undefined but temperamentally soothing “common ground,” rather than calling on them to meet him in the “center.” Of course, what really matters is what Obama and Republicans actually do next year, not what they say they’re going to do. And they’re going to be at war.

Yup! It’s going to be a blast.

Kicking and screaming all the way, to be sure.  But the first tendrils of Reality Non-Unicorn are beginning to worm their way into and subvert the Online Left’s comfortable universe-consensus.

Obama Suggests Possibility That Health Reform May Not Happen

Maybe I’m misreading this. But if you look at the transcript of Obama’s remarks at a fundraiser last night, it seems like the President was at least raising the possibility that health reform may not happen.

Gee, I wonder could have possibly caused that realization to dawn.

Hold up: let me make this more explicit. 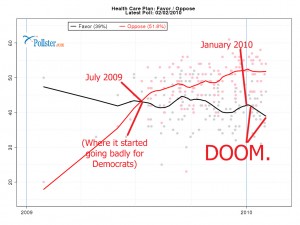 At this rate, they’ll be noticing that the upcoming 112th Congress isn’t controlled by Democrats by at least, oh, March of 2012.