[UPDATE] And welcome, Instapundit readers. What I said below, and I suspect that a few of you may find this upcoming bit of DVD news of interest.

[UPDATE] Welcome, Hot Air readers. And may I say that there’s a part of me that hopes that Pelosi tries to quash this? It’s a lovely time of year for a gutter war.

I was tempted to go with the headline “FEDS RAID VISCLOSKY!” solely to give some of our lurkers acute acid reflux, but really: this is quite good on its own:

Federal law enforcement officials have subpoenaed the congressional and campaign offices of Rep. Pete Visclosky (D-Ind.) to get information about a former defense lobby firm raided by the FBI, according to Visclosky.

Certain Visclosky employees have also been sent grand jury subpoenas requesting documents related to the PMA Group, a lobby shop with strong ties to the Indiana lawmaker. Visclosky’s former chief of staff, Rich Kaelin, was a high-profile lobbyist at the firm that closed its doors at the end of March.

END_OF_DOCUMENT_TOKEN_TO_BE_REPLACED

From the Post-Gazette’s blog:

Today, former naval officer Ryan Bucchianeri announced he would run against Murtha for the Democratic nomination for the 12th District congressional seat next year. The Monongahela native graduated from Ringgold High School in 1993 and then the U.S. Naval Academy, before receiving a master’s in public policy from Harvard’s Kennedy School of Government.

Bucchianeri won’t win the primary, of course – the netroots will be the only ones who might give him the money that he needs to make a successful challenge, and they’ll never support an unapologetic war veteran over a man who calls Marines murderers, particularly when the latter is also a crony of the Speaker of the House.  But that’s all right.  The fact that he’s getting one in the first place tells us that he’s more vulnerable than he’s been.  So we go after him next year.  If that doesn’t work, 2012.  If that doesn’t work, 2014.

Eventually we’ll get him.

*He didn’t have an opponent in the general election, either.

The Republican who challenged Rep. John Murtha in 2008 says a top aide to the embattled Pennsylvania Democrat threatened to have him recalled to active duty in the U.S. Army so he could be court-martialed for engaging in politics while serving in the armed forces.

Bill Russell — who challenged Murtha in 2008 and intends to do so again in 2010 — said Murtha chief of staff John Hugya made the threat during a National Rifle Association event in mid-March.

Hugya, who has a bit of a nasty mouth to him – not surprising, given that he works for a politician who likes to call Marines ‘murderers‘ – is probably safe enough from actually being fired and/or censured. This is partially because the comments themselves are the sort of thing that you can get away with saying once, and often twice: as they say, politics ain’t beanbag. More importantly, Murtha is an integral part of Speaker Pelosi’s House machine. She’ll do nothing about this, of course.

But you can’t afford a flight, these days? Well, Jack Murtha is ready to help! – At least, the NRCC takes the attitude that he should be making the offer, and it’s hard to fault their logic. Actually, it’s impossible to fault their logic: Murtha did funnel all that money to ‘his’ airport for his own convenience, so the least he can do is give you some, too. 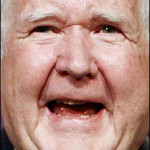 ……to stories about said politician’s nephew: well, articles like this are almost redundant.

Robert C. Murtha Jr. has made a sizable living for years working with companies that rely on Pentagon contracts over which his uncle, Rep. John P. Murtha (D-Pa.), holds considerable sway.

He has maintained that his uncle played no role in his defense-related work, much of it secured without competition. Newly obtained documents, however, show Robert Murtha mentioning his influential family connection as leverage in his business dealings and holding unusual power with the military. The documents add to mounting questions about Rep. Murtha, whose use of federal earmarks to help favored defense companies and his relationship with a former lobbying firm are under scrutiny by federal investigators.

The visual cue is fairly obvious, after all. END_OF_DOCUMENT_TOKEN_TO_BE_REPLACED

This will do. For a start. Via Geraghty:

House Democratic leaders face new pressure from four watchdog groups usually allied with them to open an investigation into the ties between three powerful Democrats and the now-defunct lobbying firm The PMA Group.

Democracy 21, Common Cause, Public Citizen and U.S. PIRG on Thursday called on the House Committee on Standards of Official Conduct to probe the relationship PMA had with Democratic Reps. John P. Murtha of Pennsylvania, Peter J. Visclosky of Indiana and James P. Moran of Virginia. The lawmakers secured lucrative earmarks for defense contractors represented by The PMA Group and received political donations from family members of the lobbying firm’s founder.

As the article notes – and has been noted in the past – this issue has been brought up numerous times by Rep. Jeff Flake (R-AZ), and Speaker Pelosi and the rest of her crew keep squashing it. It’s going to be harder to do that going forward, if groups like US PIRG are going to be pushing the issue. Of course, it’s entirely possible that what the normally Democratic-allied groups are doing here is trying to create a firebreak; get a few of the absolute worst cases tossed overboard and claim it’s a housecleaning.

I hope not – I like to think the best of people, for as long as I can – but even if it is a cynical ploy I’d still favor running with it. After all, there’s no guarantee that said cynical ploy would work.

I have to admit that when it comes to avenging slights made against it this administration has both total recall and infinite patience. What’s below (via Instapundit) is probably the most important part of this New York Times article about Jack Murtha’s travails:

While past presidents often courted Mr. Murtha with phone calls and private meetings, President Obama has extended to him no such courtesies. On a visit to the White House, the lawmaker told senior defense officials that it would be “foolish” and “ridiculous” to cancel all of a $13 billion contract to buy new presidential helicopters, as he later recounted to a defense industry newsletter. But Defense Secretary Robert M. Gates has insisted on scrapping the deal as a symbol of waste.

And in a recent meeting with the secretary, Mr. Murtha pushed a plan to divide a $35 billion contract to build a new airborne refueling tanker between two rival contractors — a compromise that pleases both but would cost the government much more. Mr. Gates listened with little response, several people briefed on their conversation said, but he later dismissed it.

You see, restrictions on how, how often, and how much one may trade favors for cash can be finessed. There’s always a loophole or an exception; in fact, often simple indifference on the part of those with oversight can be enough. But Jack Murtha’s power comes from his supposed access. He is not supposed to be one who can be slighted – or worse, ignored.
END_OF_DOCUMENT_TOKEN_TO_BE_REPLACED

(Sorry about the technical difficulties.)
(Also, read the whole article.)

As Jammie Wearing Fool notes, don’t expect Murtha to say a damned word about this.

CAMP PENDLETON, Calif. — A military jury on Thursday acquitted a Marine sergeant on charges of murdering an unarmed detainee during battle in Fallujah, Iraq.

The jury also acquitted Sgt. Ryan Weemer of dereliction of duty in the November 2004 death.

Weemer hugged and thanked his attorney after the verdict, and his wife, sister and high school English teacher wept from front-row seats.

The panel of eight Marines who served in Iraq or Afghanistan got the case Wednesday and deliberated more than four hours.

OK, I paraphrased – but JWF would agree, I think.

The phrase ‘bawling like a stuck calf’ comes to mind, for some reason.

The region’s outspoken congressman is in the national lens again – this time CBS News television cameras – in a report Wednesday that calls him “the king of earmarks who wastes a lot of taxpayer money” and implies that the FBI is investigating.

U.S. Rep. John Murtha, D-Johnstown, responded by waving the Constitution at the camera, saying: “What it says is the Congress of the United States appropriates the money. Got that?”

The CBS article in question is here, along with video footage that Murtha is going to regret. You can say and do things to, say, a private citizen with a video camera that you can’t do to a national news organization, and he made no friends in CBS with that antic. As can be seen with the next couple of paragraphs:
END_OF_DOCUMENT_TOKEN_TO_BE_REPLACED

WASHINGTON (AP) – U.S. Rep. Pete Visclosky has promised to return money from donors with ties to a troubled lobbying group, but critics say his ties to PMA Group run deep.

The northwest Indiana congressman’s former chief of staff worked as a lobbyist for the firm, and Federal Election Commission reports show he received at least $100,000 in contributions from donors tied to PMA Group between 2006 and 2008. PMA Group was the top donor to Visclosky’s 2008 re-election campaign.