That the good Senator is apparently at least considering the idea of endorsing Mitt Romney is one thing: everybody does endorsements, they’re not always going to be for your candidate, so suck it up and walk it off. But – unlike the Senator – I want Ron Paul out of my darn primaries.  Yesterday, if possible.  The non-Republicans that he’s bringing in won’t vote for our candidate – shoot, I don’t expect even a third of them to vote for Ron Paul – and the Republican ones… well, I can’t fault a person for making a protest vote. In the primary.

And I’ll tell you this: as long as Ron Paul is in the race the less crazy things that he likes to talk about are going to continue to be ever-so-slightly radioactive among the general public, simply because it’s Ron Paul Of The Newsletters saying them.  Like it or don’t like it, as you please: this simply is.  It is my opinion that libertarians (which I am not, although I am definitely libertarian-leaning) would be better suited to find somebody else to be their public face, because Ron Paul isn’t going to win the Republican nomination and he’s going to promptly implode once he tries that third party run that everybody quietly expects…

(Via Hot Air Headlines) At least, that’s what he’s telling the National Journal:

NJ What is your ambition?

DeMINT My hope is to elect five or 10 more solid conservatives and go home and rock on my front porch.

NJ This is your last term?

DeMINT Yeah. It was not a campaign promise; but that is my plan, that the election last year was my last one. It has always been my plan not to serve more than two terms.

END_OF_DOCUMENT_TOKEN_TO_BE_REPLACED

Admittedly, we were hoping for more than 37%, but every little bit helps.

I’m not going to be cruel and quote the total poll results. Suffice it to say that I wish that Greene had actually done something to deserve the public humiliation that is coming for him.  The poor SOB just wanted to try out American democracy for himself, and he’s not going to get anything out of it…

PS: OTOH, Nikki Haley is easily crushing Vince Shaheen in SC-GOV, and I’m sure that Shaheen has done something to deserve that.

(Via Dan Collins of POWIP) Senator Jim DeMint (R, SC) is back from Honduras – despite the best efforts of the Democrats to stop him from going – and he’s unkind about what has been pretty obviously an attempt by the American government to admit that we made a mistake and picked the wrong side of the Honduras issue:

[American policy re: the Zelaya ouster] was set in a snap decision the day Mr. Zelaya was removed from office, without a full assessment of either the facts or reliable legal analysis of the constitutional provisions at issue. Three months later, it remains in force, despite mounting evidence of its moral and legal incoherence.

In a day packed with meetings, we met only one person in Honduras who opposed Mr. Zelaya’s ouster, who wishes his return, and who mystifyingly rejects the legitimacy of the November elections: U.S. Ambassador Hugo Llorens.

When I asked Ambassador Llorens why the U.S. government insists on labeling what appears to the entire country to be the constitutional removal of Mr. Zelaya a “coup,” he urged me to read the legal opinion drafted by the State Department’s top lawyer, Harold Koh. As it happens, I have asked to see Mr. Koh’s report before and since my trip, but all requests to publicly disclose it have been denied.

END_OF_DOCUMENT_TOKEN_TO_BE_REPLACED

(Via Jen Rubin) Let’s review (I almost did this using an extended metaphor of a fencing match, but I didn’t want actual fencers wincing):

And that, ladies and gentlemen, is what one motivated Senator can do to mess up another Senator’s day.

PS: Bear this in mind when the reconciliation question comes up regarding the Democrats’ messed-up health care rationing bill.

Via @AmandaCarpenter here (and a related thought here) and Hot Air: how the Washington Post chooses to symbolize the opposition (currently somewhere around 53%) to the proposed Democratic health care bill. 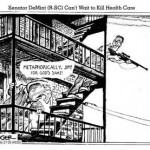 Senator Demint with a sniper rifle.

This was… vile… of them.

While I agree with Ed Morrissey that seeing Senator Jim DeMint make Senator Kay Hagan admit several times that there was a double standard in the way that they killed his call for a GAO audit of the Federal Reserve (a very popular House initiative) while not applying the same rule to their own pet clauses, I also agree that it was prefaced by what some might consider somewhat dry (but necessary) exposition. So here’s a cut-down version:

Very quickly: Sen DeMint of South Carolina is trying to put in an amendment calling for an audit of the Federal Reserve into a bill, so that it can be voted on. Senator Nelson of Nebraska promptly pops up and calls for the amendment to be removed, as not being germane: Senator Hagan of North Carolina promptly approves that call. DeMint then goes on to mention specific other clauses that would also apply, in order to get Hagan to a) admit that they fall under the same rule and b) highlight the fact that they won’t be removed, too. The fact that I think that this is funny no doubt says awful things about my sense of humor, after going on eight years being involved in following politics; but it never hurts to highlight hypocrisy.

We will now pause for the inevitable “You guys were just as bad!” ‘response,’ which is of course a code phrase for I must immediately attack anything that threatens to destroy my faith in the inherent virtue of the Democratic Party. Given recent polling, I have hopes for some truly entertaining exercises in denial.

PS: Senator DeMint will be at the RS Gathering, by the way.