Sorry: I can’t write out ‘truth to power’ with a straight face when it comes to Joe Biden.  Anyway… “Sen. Tom Cotton challenged Vice President Joe Biden’s criticism of the GOP’s letter to Iran, questioning his foreign policy expertise…. “Joe Biden, as [President] Barack Obama’s own secretary of defense has said, has been wrong about nearly every foreign policy and national security decision in the last 40 years,” the Arkansas Republican said Tuesday on MSNBC.”

Tom Cotton went on to note that if Joe Biden loves the Senate so much then he should have told the President point-blank to stop trying to squeeze Congress out of the treaty-making process.  Left unsaid, apparently, was the (to me, at least) commonplace observation that since Barack Obama keeps claiming that he doesn’t know about anything until it hits the papers then Sen. Cotton had pretty much no choice but to advise the President in a format that President Obama would at least find familiar.  Also left unsaid: Vice President Biden should probably start remembering that the Senate is increasingly a place filled with people who are contemptuous of him, and rightly so.  We went to quite some trouble to replace Mark Pryor with Tom Cotton, after all… END_OF_DOCUMENT_TOKEN_TO_BE_REPLACED

…What? No, this isn’t about the ‘butt buddy’ thing. I actually understood from the beginning what Vice President Joe Biden was trying to say there: he was trying to use a bowderlized version of ‘[***]hole buddy,’ which was originally a common enough (and not actually sexual) slang term during my father’s and Joe Biden’s respective generations. I mean, sure: only Joe Biden could manage to allege a homosexual relationship between himself and a member of the audience while trying to not raise any eyebrows with his phraseology. But that is, as they say, how the Joe Biden do.

…the second time, to apologize:

Vice President Joe Biden on Sunday called the crown prince of the United Arab Emirates to clarify that he did not mean to imply in his remarks last week that the Gulf ally was supporting al-Qaida fighters in Syria.

And to semi-quote JRR Tolkien, don’t forget: the Democrats decided to make this man the backup to the Presidency.  Because I certainly won’t forget; I suppose that I might forgive them some day, but this is not that day. END_OF_DOCUMENT_TOKEN_TO_BE_REPLACED

You have got to be [expletive deleted]ing me:

He's having quite the week RT @danabash Joe Biden speaking at a women's conf just singled out BOB PACKWOOD as the kind of Repub he misses. 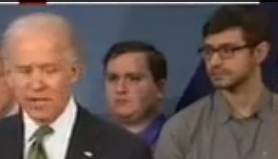 END_OF_DOCUMENT_TOKEN_TO_BE_REPLACED

“I have traveled over 640,000 miles since I’ve been Vice President, and most of the time the President sends me to places that he doesn’t want to go.  So I’ve spent an awful lot of time with McCain and others in Afghanistan and Iraq, and so it’s nice to be here in Germany.”

Mind you, I understand President Obama’s reluctance to visit either country: it is currently full of people who the President must find to be absolutely alien to him, not to mention completely outside of his experience.  The differences in morals, ethics, culture, cultural assumptions, attitudes about and towards women, religious belief structures, general outlook on life… these are all profoundly different; the President clearly does not understand the people who hold them, and never probably never will.  I suspect that Obama doesn’t really want to understand them, either.

And that’s just the American military.  God only knows what Barack Obama thinks of Afghans and Iraqis.

While I understand that it’s absolutely fascinating to watch Joe Biden campaign on the unique message Let’s have a trillion dollar tax hike!

BIDEN: “On top of the trillions of dollars of spending that we have already cut, we’re gonna ask – yes – we’re gonna ask the wealthy to pay more. My heart breaks, come on man. You know the phrase they always use? Obama and Biden want to raise taxes by a trillion dollars. Guess what? Yes we do in one regard. We want to let that trillion dollar tax cut expire so the middle class doesn’t have to bear the burden of all that money going to the super wealthy. That’s not a tax raise, that’s called fairness where I come from.”

END_OF_DOCUMENT_TOKEN_TO_BE_REPLACED

“The middle class has been BURIED! …The last four years.”

Well, the RNC put out an ad about it… 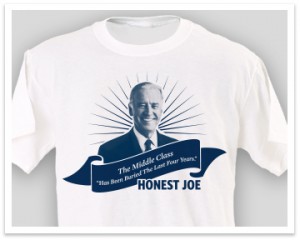 PS: No, I don’t see a dime of that T-shirt money. And yet I’m flogging ’em anyway. Wow, I must really want Romney to win.

Now he’s just messing with the rest of us.

What clown-squared thought that this clown should be a heartbeat away from the Presidency? Oh, right, the current President.

All right, I admit it: I briefly stopped reading this TNR piece (H/T: Hot Air Headlines) in order to quote from it, because the excerpt was just too good to pass up.

TYPICALLY AT this point on the political calendar, a sitting vice president scrupulously downplays his interest in ascending to the top job. The thought of course consumes him, but actually discussing it strikes him as breathtakingly gauche. Vice presidents as varied as Walter Mondale, George H.W. Bush, and Al Gore all gamely hewed to this script.

And then there is Joe Biden.

…Yes. Yes, there is. END_OF_DOCUMENT_TOKEN_TO_BE_REPLACED