Starborn and Godsons is the long-awaited (at least by me) third and probably final book in the Heorot SF series by Larry Niven, Jerry Pournelle, and Steven Barnes. Check out The Legacy of Heorot and Beowulf’s Children first, if you like. You might as well: this last book isn’t out until next April anyway.

Dunno what’s more depressing: that I only this week discovered that Larry Niven’s and Steven Barnes’ The Moon Maze Game: A Dream Park Novel came out in 2011, or that I saw ‘2011’ and thought ‘five years ago.’  Probably the latter.  After all, at least I got to read the book — but I feel that I lost those two years of lifespan, somehow, and I wouldn’t mind getting them back.

Larry Niven’s The Magic Goes Away is an extended metaphor for resource depletion, seen through the lens of 1970s-1980s environmental pessimism, of course.  This much is known. But it will still be taught in literature classes a hundred years from now, while other suchlike metaphors have been justly exiled to the dusty hells of graduate thesis footnotes, because Larry Niven can in fact write.  Not to be impolite, but there are authors out there who seem to favor other qualities above the ability to write well.  Not as many as I might like*, but they’re out there. END_OF_DOCUMENT_TOKEN_TO_BE_REPLACED

I’m surprised that Larry Niven and Steven Barnes’ Dream Park hasn’t made the list yet.  It pushes the right buttons: near-future, filk singing, and LARPing as a competitive sport.  Good stuff, good stuff.  And the sequels don’t suck, either.

And so, adieu to The Deed of Paksenarrion. END_OF_DOCUMENT_TOKEN_TO_BE_REPLACED

END_OF_DOCUMENT_TOKEN_TO_BE_REPLACED

I’m a little surprised that Ringworld hasn’t come up, yet. Maybe I’m assuming that those of you who are science fiction fans are all Niven fans already.  Anyway, it’s the best damn pastiche of the Wizard of Oz you’ll ever read.  No, seriously, Larry Niven himself has had this insight (WARNING: TV TROPES LINK).

And so, adieu to The High Crusade.

It has long been my private contention that the intellectual Left’s stranglehold on academia has been a boon for the science fiction community: if you’re a lyric poet, an economist who takes Hayek seriously, and/or a historian who spits at the sight of any book with ‘People’s History’ in it, and you can write, there’s a place for you somewhere in the speculative fiction field.  I mention this not for any real reason except as an intro to the aforementioned Law by Larry Niven

Psi and/or magical powers, if real, are nearly useless.

More specifically: this One Nation thing will not work for the same reason that the Brownbaggers didn’t work, or the Coffee Party didn’t work, or any of the other cargo-cult projects that the Left have embarked on to ‘counter’ the Tea Parties didn’t work.  It will not work because it is a cargo cult project: which is to say, it is an attempt to use the Law of Similarity by creating as many trappings of a populist movement as can be arranged, in the hopes that it will somehow attract actual populists.  In short, it is efffectively a magic spell.

And as Niven noted: if magic worked that well, society would be already using it to do things.

PS: Yes, I understand that they have no choice in the matter: if they tried actually building a populist movement, the Left would rapidly run up against the problem that populist sentiment right now is pretty heavily anti-government interference – which is to say, anti-Left.  So what?  It’s not my fault that there are people out there who are emotionally invested in the big-government fallacy.

This one via Instapundit, and I’ve heard of it in the past:Take Back Your Government

, by Bob Heinlein. I’d say “Yes, the Bob Heinlein” – except that nobody would dare write under the same name. It’s a practical treatise on local electoral politics that I suspect a bunch of people would like to read right now.

And, it being Sunday, we say goodbye to Destroyer of Worlds

I was originally going to go with Going Rogue: An American Life

, solely on the basis that I actually bought it (I typically ignore partisan political books); except that I’ve already slapped it up there on the sidebar and a nontrivial percentage of my readership doesn’t really give a damn.

So… Larry Niven’s Destroyer of Worlds

Yes. Where the Deep Ones Are

is precisely what you think that it is. 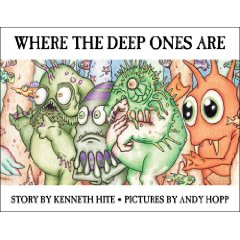 And this is why Ken Hite has a devoted following, and you should get him to write things for you.