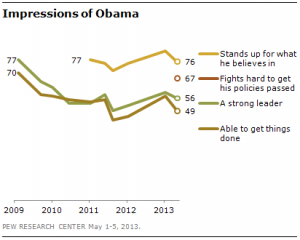 Iowahawk noticed the exact same thing that I did.

George W. Bush’s highest unemployment rate was 7.8%. Barack Obama’s lowest rate, to date, is 7.9%.  Unlike many people out there, I think that Barack Obama tried very hard to get that rate down and did the best job that he was capable of, but it was apparently just too hard for him to personally manage.  I think that it’s time that somebody else got a shot at it.

PS: Getting 171K jobs was  a good thing, of course.  We should always thank people for their efforts.

This official Obama for America Tumbler entry – a picture of Obama wearing a Captain America cowl – got the coveted ‘Dude‘ from Hot Air Headlines for sheer what-universe-is-that-from?, but I felt that the original still lacked something. 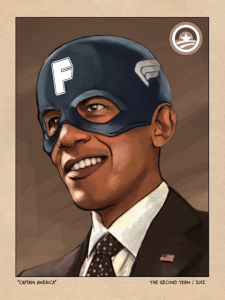 There.  Much better.  Not to mention, more accurate on at least two levels.

PS: Please note for the record that the “Hi, I’m a doofus!” look was unchanged from the original.  Bit of a subconscious admission there, I hope.