Kensli Davis’ mom had asked the Atlanta, Georgia, bakery staff to decorate it with images of the Hawaiian princess — but they misheard.

She ended up blowing out the candles on a cake emblazoned with a giant cannabis leaf, green icing and a My Little Pony-style character with red eyes and a puff of smoke from its snout.

END_OF_DOCUMENT_TOKEN_TO_BE_REPLACED

Sans Pocahontas, of course.  She needs to be switched out with either Mulan or Cuzco; and I’d only go with Cuzco if he somehow retained his ability to transform into a llama at need. So, yeah, Mulan.  She’s easily the best tactician of the Disney princesses*, after all. 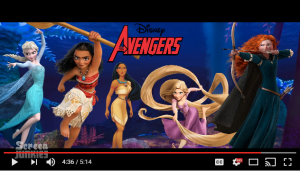 This is, of course, from the Moana Honest Trailer, which I’d talk more about except DISNEY PRINCESS AVENGERS. That drove everything else out of my head, sorry. END_OF_DOCUMENT_TOKEN_TO_BE_REPLACED

Disney has decided to end the discussion, once and for all.  If your star is a girl in a dress that is carting around an animal sidekick, she is a princess.  I am pretty much quoting from Moana, here. They really did spell it out like that; I guess that the Mouse is tired of all of these shenanigans getting in the way of them moving merch.

As for the movie: excellent Golden Age science fiction space opera, although it’s a shame that they couldn’t sneak in ray-guns somehow. The soundtrack is outstanding, although the song-songs must bow to the background music.  Except for the David Bowie/Freddy Mercury/Prince tribute song in the middle – and I am neither lying about that, nor disapproving. No blood, nobody dies, kind of scary bits but nothing kids can’t handle, they’re gonna cry their eyes out during the film, so when you take the kids bring tissues.

I think that’s it.

This one looks really good, actually. Particularly the coconuts. The coconuts amuse me.

If they can sustain this, Moana is going to be a Moanster* of a movie.

*Yeah. Sorry about that.

Full points for getting Dwayne Johnson for the Maui voice: Disney has a knack for this kind of casting.

Also getting a little bit of a Genie-from-Aladdin vibe here, which is fine by me.