Bet you thought that the Animaniacs came up with this song, huh? Nope. Harry Belafonte sang it a long time ago.

There is something arresting about this campaign ad from the NRCC, which indeed draws on everything in the title.

Now, I will not lie to you: nowhere does the ad claim that John Barrow has ever done cocaine with a monkey.  And I will freely admit that the title of my post may cause people to wonder whether John Barrow has ever done cocaine with a monkey.  In fact, I will even cheerfully concede that the truth – that John Barrow ‘merely’ likes to vote to fund stuff* that the government probably shouldn’t be funding until it funds all the other, more important stuff – may feel, ah, somewhat prosaic.  Nonetheless… there’s just something about a minimalist political ad about a woman with a monkey on her shoulder talking about how John Barrow likes to spend taxpayer dollars on programs involving monkeys and cocaine.
END_OF_DOCUMENT_TOKEN_TO_BE_REPLACED

So here’s a picture of a monkey riding a dog. 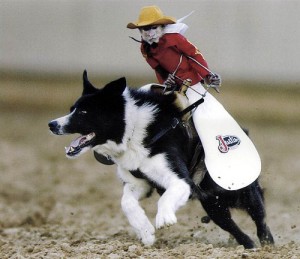 Blessed if I know whether the dog’s happy about it or not.

This is an epic-level paragraph on the problems with getting Iran to negotiate about its nuclear program in good faith:

“It’s like playing chess with a monkey,” said one diplomat close to the talks. “You get them to checkmate, and then they swallow the king.”

That had to have been a Brit making that statement, by the way. No American would dare.