Danged if I know whether this would be smart, or not:

The Egyptian government […] announced it had begun deliberations on whether to ban the [Muslim] Brotherhood, a long-outlawed organization that swept to power in the country’s first democratic elections a year ago.

Such a ban — which authorities say is rooted in the group’s use of violence — would be a repeat to the decades-long power struggle between the state and the Brotherhood.

For more than a month since the July 3 military overthrow of Morsi, Brotherhood members and supporters have attacked and torched scores of police stations and churches, in retaliation. Shops and houses of Christians have also been targeted.

END_OF_DOCUMENT_TOKEN_TO_BE_REPLACED

We will now pause for the bitter laughter of the foreign policy hawks:

The detainees were largely pro-Morsi protesters seized during clashes early Monday outside the Republican Guard headquarters. Protesters and Morsi’s Muslim Brotherhood deny any attack took place on the headquarters, saying troops opened fire on their sit-in nearby as the protesters finished dawn prayers.

Via Hot Air.  And do you know why there is laughter, and it is bitter?  It is because there is no “right” answer here.  You can choose the hardcore Islamist thugs with unpleasant gender issues who nonetheless happened to win an election; or you can choose the (at-best) endemically corrupt and definitely authoritarian military cabal who nonetheless would like to get the country out of its current death spiral.  Have fun!  END_OF_DOCUMENT_TOKEN_TO_BE_REPLACED

Tell me again how marvelous it is that we encouraged the Muslim Brotherhood to take over in Egypt: “In a dramatic policy shift, Egypt will seek to forge “tight” relations with Hezbollah, Egyptian Ambassador to Lebanon Ashraf Hamdy revealed in a candid interview published Saturday in Lebanon’s Daily Star.” Such ‘tight’ relations will presumably include Hezbollah’s right to keep getting ready for that armed conflict with Israel that Hezbollah is supposedly not REALLY getting ready for. Because, of course, nobody in the Middle East has ever preemptively decided to try to attack Israel, ever. END_OF_DOCUMENT_TOKEN_TO_BE_REPLACED

One. This is from the official Tumblr of the Obama re-election campaign (click it fast, because it won’t be there soon): [UPDATE: Well, that was fast.] 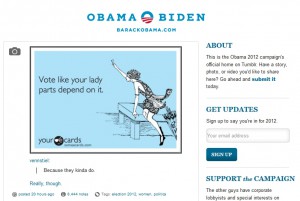 Two. We are giving aid to Egypt.  Which is to say, we are giving Egypt $450 million of your tax money.

Four.  Let’s look at that Tumblr again, shall we?

Five.  I think that I do agree with the Tumblr, after all: American women should vote to protect lady-parts.  Which is to say, they should be voting for Romney-Ryan.

You may have noticed a little while back that the US Embassy in Cairo called out the Egyptian government/Muslim Brotherhood for saying one thing in English (read: Western foreign consumption) and another in Arabic (read: domestic/regional consumption).  Which is all to the good… so why did the President do the same thing this week?

The View: “In an interview with ABC’s “The View,” Obama — who is in New York to address the United Nations General Assembly — was asked if the Benghazi assault was indeed terrorism.  “There’s no doubt that the kind of weapons that were used, the ongoing assault, that it wasn’t just a mob action,” Obama said.”

Obama’s UN speech: “In every country, there are those who find different religious beliefs threatening; in every culture, those who love freedom for themselves must ask how much they are willing to tolerate freedom for others. That is what we saw play out the last two weeks, as a crude and disgusting video sparked outrage throughout the Muslim world. I have made it clear that the United States government had nothing to do with this video, and I believe its message must be rejected by all who respect our common humanity.”

…Annnnd that’s pretty much everything that the President had to say at the UN as to why we are having ongoing riots in the Middle East in the first place: it’s all because of that video. Oh, sure, the President admitted that Iran funds terrorist groups; but he knows, you know, and I know that the Benghazi attack (and probably the triggering riots*) were started up by an al-Qaeda affiliate (read: Sunni), while Iran prefers to work through groups like Hezbollah (read: Shi’ite). Which most of the people at the UN know, too – so yeah, they’re getting a message loud and clear, and it’s this: Barack Obama doesn’t want to look too closely at existing terror networks in the Middle East. END_OF_DOCUMENT_TOKEN_TO_BE_REPLACED

Egypt is neither an ally nor an enemy of the United States, President Barack Obama said Wednesday in the wake of a violent protest at the US embassy in Cairo.

Sunlen Miller and Kirit Radia report: President Obama today reiterated that Egypt is an ally of the United States and that the he’s “always said” to President Hosni Mubarak that reform, both politically and economically, is essential for Egypt.

“Egypt’s been an ally of ours on a lot of critical issues,” Obama said from the White House this afternoon, “President Mubarak has been very helpful on a range of tough issues in the Middle East. But I’ve always said to him that making sure that they are moving forward on reform — political reform, economic reform — is absolutely critical to the long-term well being of Egypt.”