Come on, don’t make this easy for me.  A ‘secret Arctic Nazi base’ is already enough.  You don’t have to spot me this: END_OF_DOCUMENT_TOKEN_TO_BE_REPLACED 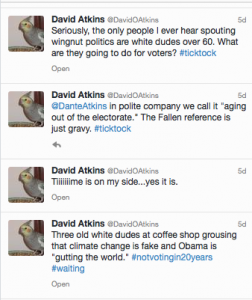 Note, by the way, that judging from the aforementioned Fallen quote Mr. Atkins apparently sees himself as a demon.  Which is… fascinating, but I do not have enough of a background in clinical psychology to really analyze that man’s self-image. Although I will note that it’s so easy to go evil, in this thing of ours.  You always have to be careful. END_OF_DOCUMENT_TOKEN_TO_BE_REPLACED

I… am having difficulty processing this story.

Illinois Democratic Gov. Pat Quinn is in some hot water with the Jewish community after his campaign tweeted—and then quietly deleted—several messages urging backers to read an article comparing black Republican voters to Jews who collaborated with the Nazis.

That is indeed what the article said, and my difficulty is not in believing that Pat Quinn might think that such a comparison was warranted.  I am fully aware that he could think that, and does think that.  What is causing my head to short-circuit is that the Quinn campaign did not immediately have whatever fool intern was responsible for the governor’s endorsement of bigotry – over Passover weekend, no less! – drawn, quartered, and the pieces displayed as an attempt to placate critics.  What the Hell was Pat Quinn thinking?  Was Pat Quinn thinking?

END_OF_DOCUMENT_TOKEN_TO_BE_REPLACED

The problem with this Daily Beast article is pretty much that: if you’re going to limit the speech freedoms of one set of murderous totalitarian regime-groupies, you should limit the speech freedoms of the other set of murderous totalitarian regime-groupies. Frankly, from the point of view of their victims… Communists are just Nazis with worse fashion sense.

Needless to say, the author of said Daily Beast piece would scratch his head at the above. So it goes.

END_OF_DOCUMENT_TOKEN_TO_BE_REPLACED

Riiiiiiiiiiiiight.  Then again, if I had just called the Republican party a bunch of Goebbels-loving liars and got caught doing it – particularly if I’m from California, which is having a somewhat more competitive series of state and federal races this year than usual – I’d be “pre-scheduling” a root canal, too.  Less painful all around.

PS: The movie about a Nazi dentist that you’re trying to remember is Marathon Man.  Haven’t seen it myself, but it’s supposed to be good.

PPS: Yes, I’m doing a lot of paraphrasing, here.  And?

Today’s let’s-urinate-on-the-memory-of-Nazi-victims comes to us courtesy of  Communications Workers of America International Vice President Christopher Shelton, who seems to be having difficulty telling the difference between murdering millions of people in literal carload lots, and ending public sector employees’ ability to collectively bargain over how much of said people’s work-offered health insurance policies has to come out of their pocket.  And by ‘be having difficulty telling’ I mean ‘is too cognitively impared to recognize.’  Watch the video yourself before you tell me I’m wrong:

Yeah.  When the first words out of your mouth include “Welcome to Nazi Germany,” (and you end by threatening to start World War III in your home state) you have a problem with your rhetoric.  Because, generally speaking, the ability to claim that one is in a fascist dictatorship and police state that ruthlessly suppresses dissent and persecutes minorities and get away with it is usually an unsubtle hint that one is in fact not in a fascist dictatorship, etc, etc, etc.  People who are actually in fascist dictatorships, etc, etc, etc, generally don’t bring up the subject in public.  And they certainly don’t do it over a loudspeaker. END_OF_DOCUMENT_TOKEN_TO_BE_REPLACED

In this case, scientific experiments designed to create TELEPATHIC DOGS.

No, seriously, they spoiled any innocent enjoyment that I might have taken from this picture.  Because you just know that if they had succeeded then they would have used it to kill more racial/religious minorities.

John Nolte (via Ed Driscoll), on a Salon review of new Disney flick Secretariat that reads like someone had lost a bet:

Wow! Cross burning, xenophobia, Leni Riefenstahl, master-race, and whiteness and power, all in a review of a harmless little family flick about a horse. There’s part of me that admires O’Hehir’s ability to summon that kind of rage. Where was he when I couldn’t pull those grocery carts apart?

John’s not kidding; all of those terms are in the review.  Apparently, in this flick Secretariat was a member of ODESSA* – which, ironically, would have made me more likely to watch the film if only the director had had the courage to pursue his inner vision to such an extent.  Or something like that.

*The Odessa File was actually pretty good, for a potboiler.

Via AoSHQ, I bring you… Dead Snow.

I don’t know who it is that keeps reading my mind when it comes to picking out movie ideas, but they can keep doing it, with my compliments. Even if it’s in Norwegian.