This is really quite droll. Apologies for the link to a progressive site: but, shoot, said site sounds like it’s working its way up to endorse Republican incumbent Chris Gibson (R, New York-19) anyway. Or at least roll with the punch; it’s certainly not really impressed with the Democratic alternative at this point.

DCCC Chairman Steve Israel, eager to keep Hughes’ money flowing, has played him for a fool, not even giving him a coveted Red-to-Blue slot until Sean went bonkers on him. “Israel doesn’t help at all,” one heartbroken staffer told me. “All he does for this campaign is ship us bagels and cream cheese every week. We’d all rather have local donuts. He can shove his cr[*]ppy bagels up his [expletive deleted] with the cream cheese.”

‘Hughes’ is Facebook co-founder Chris Hughes; ‘Sean’ is his husband Sean Eldridge, who is currently flailing about trying (and apparently failing) to win NY-19, and the redacted language is, I feel, not very appropriate for mature adults. Particularly those involved in a campaign that’s running for Congress. Then again, this is apparently a bad year to be a Democrat running for Congress anyway.

There was a spot of bother about this Politico video – it appeared, went down, and is back up again – but everything is fine now and there will be pie. And it’s the best kind of pie. It may very well be DOOM pie for Sean Eldridge.

Basically, the video shows Politico reporter Alex Isenstadt describing how Sean Eldridge – the presumed Democratic candidate for NY-19 – has been essentially hiding from reporters and the district for the last several months (Eldridge is apparently also using his company to try to trade votes for jobs*). Which is frankly bizarre, particularly since Republican incumbent Chris Gibson was reportedly happy to talk to Isenstadt: as Politico notes, often it’s the other way around. END_OF_DOCUMENT_TOKEN_TO_BE_REPLACED

So nice to see an anointed candidate for the Other Side have to suddenly discover that there’s going to be a primary, after all:

Congressional hopeful Sean Eldridge may have to face an unexpected primary challenge from a fellow Democrat in New York’s 19th.

On Monday, Frank Steinherr, an attorney, sent an email to Democratic County Chairs pitching himself as “the right choice” to combat Republican incumbent Chris Gibson. Eldridge “brings big problems,” the young lawyer wrote. “His candidacy has been welcomed by Republicans almost as much as Eldridge’s own supporters!”

Dang.  They’re on to us. END_OF_DOCUMENT_TOKEN_TO_BE_REPLACED

I mean.  Politicians are going to have to pick a side, here.

Sean Eldridge, the soon-to-be Democratic congressional candidate and husband of New Republic owner Chris Hughes, is staying silent on the Syria debate, even as his opponent has stated firm opposition to a military strike.

The Syria debate has put several candidates in a bind ahead of the 2014 elections — none more so than Eldridge. He and Hughes are close friends of Minority Leader Nancy Pelosi and other Democratic leaders who support Obama’s proposed strike. Hughes also worked on Obama’s 2008 presidential campaign. At the same time, a large majority of Americans — including Eldrige’s would-be constituents in New York’s 19th — oppose the strike.

Given three full days to respond, neither Eldridge nor his spokesperson replied to multiple requests for comment on Eldridge’s Syria position.

As Politico noted: Republican incumbent Chris Gibson is firmly in opposition to a Syria strike. Whether you agree with that position or not – and I’m not judging people on it, either way – it is nonetheless a position.  What Sean Eldridge is apparently trying to do here is run out the clock, in the hope that once the USA commits to do something on Syria it won’t matter what his position was.  Which makes Eldridge quite the… equivocator, doesn’t it? END_OF_DOCUMENT_TOKEN_TO_BE_REPLACED

This is what you see when you go to http://seaneldridgeforcongress2014.com/ (Sean Eldridge being the Democratic elitist carpetbagger trying to beat sitting Congressman Chris Gibson): 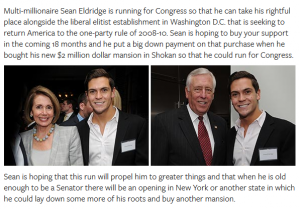 END_OF_DOCUMENT_TOKEN_TO_BE_REPLACED

I really hope that this is representative of the Democratic party’s Congressional battle plan for 2014:

Word of Mr. Eldridge’s political plans has delighted the friends who make up his social circle: Donors to his exploratory committee include George Soros, the billionaire financier, and Sean Parker, the tech entrepreneur behind Napster and Spotify.

But his ambitions have puzzled some residents among the farmers, mill workers and small-business owners who populate this district, which rises through the Catskills and rolls north through cornfields and apple orchards to the Vermont border.

END_OF_DOCUMENT_TOKEN_TO_BE_REPLACED

Dr. Hayworth – odd, there are a lot of medical doctors running as Republicans for Congress this session; I wonder why that is? – is up against John Hall in NY-19.  She is, in fact, well-positioned to take the seat away from the man, and not before time.  We spoke about the campaign: