For everyone who asked “than,” here’s your banner photo. twitter.com/JanCBS/status/… 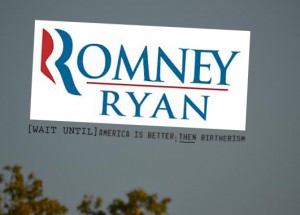 There. Done.  Thanks, Obama for America!

As I said in Twitter earlier: the Democrats really need to learn not to call up what they cannot put down. Apparently, (mostly female) Obama for America staffers had to brandish chairs to keep the (mostly male) Occupiers at bay:

END_OF_DOCUMENT_TOKEN_TO_BE_REPLACED

The Story So Far: two days ago, the Obama administration – using the fig-leaf/cutout of Super PAC Priorities USA – accused Mitt Romney of being a murderer because a company that Romney used to own closed down a steel mill (several years after Romney left that company) and that meant that the wife of the husband who lost his job at that steel mill (one Joe Soptic) didn’t have any insurance after the wife left her job several years after the layoff and several years after all of that the wife was diagnosed with cancer and then died.  As Erick notes in the link above: if that’s an acceptable logic chain that legitimately leads one to a charge of murder, then (to give just one example) this administration murdered US Border Agent Brian Terry and Eric Holder needs to give himself up right now.

But wait!  It gets even more convoluted.  You see, the Media is balking – absolutely balking – at taking this line of attack seriously, and the Obama administration has already done its best to distance itself from the Priorities USA ad, to the point where Obama for America (OfA) spokesman Stephanie Cutter denied that they had any knowledge of Soptic’s story.

So… who’s that voice at the end of this conference call, Stephanie?  Your evil twin?

END_OF_DOCUMENT_TOKEN_TO_BE_REPLACED

You’d think that this would be chump change for them.

The very short version: President Barack Obama is scheduled to make a campaign speech on Monday, in the town of Durham, NH.  This will cost the town an estimated sixteen to thirty thousand dollars in additional overtime for cops and fire officials and whatnot.  The town is taking the position that while they’d be happy to eat the cost for a Presidential visit, a campaign stop by the President is a different story; the town also claims that they’ve asked previous campaigns to foot the bill for overtime/costs.  Obama for America has declined to do this, claiming that the Secret Service wants the extra security in place (this is fast becoming OfA’s favorite excuse for bad visuals); the town is now contemplating symbolically dis-inviting the President. If passed, then hi-jinks will then presumably ensue.

No, really, that was the really short version. END_OF_DOCUMENT_TOKEN_TO_BE_REPLACED

You know how people would joke that it was going to be incredibly easy for the RNC to do campaign ads this election season, because they’d write themselves?  That in fact the GOP would just have to show Obama and the Democrats being… Obama and the Democrats?  That we might not even have to do more than cut and paste?

Yeah.  As God is my witness, we were JOKING about that last part.  We didn’t think that our opponents were going to be that dumb.

END_OF_DOCUMENT_TOKEN_TO_BE_REPLACED

Let me just establish-via-selected-quotes (via Patheos) the problem that the Democrats are facing with religious voters.

In 2008, the Obama campaign sought ways to cooperate with religious moderates and conservatives and make them feel more welcome among Democrats.

According to exit polls, the effort paid off. Obama made gains over the 2004 nominee, Massachusetts Sen. John Kerry, with voters who attend religious services more than once a week, 43 percent to 35 percent. Obama also won 26 percent of the evangelical vote, compared with 21 percent for Kerry.

But from 2008 to 2010, when control of Congress was at stake, the DNC cut its faith outreach staffing from more than six people to one part-timer, according to The Washington Post.

END_OF_DOCUMENT_TOKEN_TO_BE_REPLACED

It’s funny, really.  Somebody like Mark Halperin sees this:

Barack Obama’s decision to base his re-election campaign outside of Washington seems to be working pretty darn well. The campaign’s massive, high-rise headquarters in Chicago’s Loop achieves a fine balance between 2008’s hip-casual dorm room (there’s a Ping-Pong table and cheeky homemade signage) and 2012’s systematized Death Star (there are more employees than I have ever seen in a political campaign, with work stations subdivided as ever more employees are added). The place hums from early morning until late at night, designed for maximum efficiency and manifest focus.

END_OF_DOCUMENT_TOKEN_TO_BE_REPLACED

Well, the 3rd quarter is over, which means that the set of speculation over various and sundry people’s fundraising totals may now kick into high gear.  Probably the most anticipated numbers will be coming from Obama for America (OfA), given their haul last time – and their brags this time.  The Politico has started off with an eye-grabbing headline – “Obama 3Q haul: $55M or more?” (H/T: Hot Air)- which is at least something that we can use to start looking at numbers.  And write elaborate posts about them, for that matter.

Let’s go with the traditional bullet points on what needs to be taken into account at this stage of fundraising reporting. END_OF_DOCUMENT_TOKEN_TO_BE_REPLACED

Yes, I can read.  I can count and use a spreadsheet, too.  That’s why I’m saying it was a bad quarter.

Executive summary: Obama for America’s (OfA) reported fundraising total for the second quarter is significantly less than what it needed to be in order to hit OfA’s stated ultimate fundraising goals for 2012 – as in, one half to one-third of what they need.  And OfA is (grimly) aware of this, which is why they significantly downplayed their fundraising totals in their latest video, despite the fact that in raw terms the amount raised by OfA (47 million) looked highly respectable.  Which they were: just not respectable enough.

First off, all numbers here assume a raw total of forty seven million, which is what is being reported in the media* as Obama for America’s take (as the below should make clear the DNC’s numbers should not be taken into consideration when assessing the President’s fundraising goal**).  Now that this has been noted… OK, let’s walk through some numbers, here.  Below the fold is a chart showing the amount of money that Obama for America raised in the 2008 election cycle.  The links are all to official reports filed with the Federal Elections Commission, so I certainly hope that they’re accurate: END_OF_DOCUMENT_TOKEN_TO_BE_REPLACED

I would like to note for the record that there is not yet any indication that any kind of personal information, including credit card information, was stolen from the Obama for America (OfA) campaign website during the period when it was insecure.  Preliminary accounts indicate that the hack was limited to a redirect of mobile applications to a list of general ‘anti-government criticisms.’

Nonetheless, computer security is of course very important, so I suggest that OfA subscribers contact [email protected] if they have any concerns or questions about the status of their accounts, or the security of the data found within.