Such a pity… well, no.  It’s not.  But the proprieties must be observed: “Former Ohio Gov. Ted Strickland will seek to challenge Republican Sen. Rob Portman next year, launching what could become one of the top-tier Senate races of 2016… Strickland, who has been talking to donors and supporters in recent weeks, announced his decision to run in an email to supporters this morning.”  Strickland has three major problems, here:

END_OF_DOCUMENT_TOKEN_TO_BE_REPLACED 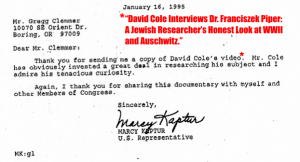 Thank you for sending me a copy of David Cole’s video [“David Cole Interviews Dr. Franciszek Piper: A Jewish Researcher’s Honest Look at WWII and Auschwitz.”].  Mr. Cole has obviously invested a great deal in researching his subject and I admire his tenacious curiosity.

Again, I thank you for sharing this documentary with myself and other Members of Congress.

The Daily Caller has the full story on this, obviously: and it would entertaining to see Marcy Kaptur’s office try to spin this exceptionally problematic letter away if it was on any other subject than Holocaust denial.  Basically, Marcy Kaptur’s excuse is that it’s a form letter (it’s not) written by an anonymous intern (who they won’t name) that went out over the Congresswoman’s signature* – and, again, the title of the ‘documentary’ was “David Cole Interviews Dr. Franciszek Piper: A Jewish Researcher’s Honest Look at WWII and Auschwitz.” I get that not everything that comes in and out of a Congressional office is scrutinized to death; but that particular title is a giant, honking tell of Teh Crazy. David Cole was so lunatic fringe on this subject that he had to go, change his name, and hide his past history in order to get any work in Hollywood**; one might think that someone in Marcy Kaptur’s office would have red-flagged it.  That they did not suggests, perhaps, that this wasn’t the first piece of Holocaust denial to ooze its way into their in-box… END_OF_DOCUMENT_TOKEN_TO_BE_REPLACED

This call is justified, I think. The New York Times:

Yeah, there’s no need to write anything further. What a pity there’s no Senate races in Ohio this year, huh?

(via @baseballcrank) It is, of course, too early for a DOOM call itself.  But this is one of the warning signs:

Top employees are preparing to leave Democratic gubernatorial nominee Ed FitzGerald’s campaign, multiple sources have told The Dispatch, choosing to part ways with a candidate who has been bludgeoned by bad headlines all month relating to personal choices he has made.

Campaign manager Nicholas Buis, communication director Daniel McElhatton and press secretary Lauren Hitt are the three FitzGerald staff members preparing to transition away from the campaign, according to sources who asked not to be identified discussing sensitive campaign issues that FitzGerald himself has not announced. Sources said the situation was “still fluid,” but it was likely that at least two – if not all of them – would leave the campaign by week’s end or only work for FitzGerald in greatly reduced roles.

END_OF_DOCUMENT_TOKEN_TO_BE_REPLACED

[Ohio] Democratic gubernatorial candidate Ed FitzGerald indicated Tuesday that he is staying in the race despite the latest revelation that he drove without a valid driver’s license for years.

The FitzGerald campaign has been rocked within the past week as news trickled out about a 2012 incident in which police caught him in a car at 4:30 a.m. with a woman who isn’t his wife and the driver’s license head-scratcher. Meanwhile, a new independent poll shows him 12 points behind Ohio Gov. John Kasich, who just raked in $2.3 million.

You know, you almost have to admire FitzGerald’s basic character: with that kind of paragraph hanging, there is absolutely nothing stopping the man from, say, kicking a puppy on national television except his own moral code. I mean, it’s not like doing so will really hurt FitzGerald’s electoral chances at this point… END_OF_DOCUMENT_TOKEN_TO_BE_REPLACED

I almost don’t want to write about this.

Ed FitzGerald, the Democrat running against Gov. John Kasich, is somehow less well known today than he was a few months ago.

A Quinnipiac University Poll out Wednesday shows 65 percent of registered Ohio voters didn’t know enough about FitzGerald – who announced his campaign in April 2013 – to form an opinion. (The numbers are within the polls’ margins of error.)

That’s actually up from a similar poll in May, when 63 percent said they didn’t know enough about him.

I mean, I have professional pride.  And while I do certainly have tendencies towards cruelty I also have a bad habit of being a big softy when the chips are down.  How do you snark on that?  What can I say about whatshisname that is actually worse than the news that after three months of campaigning people remember him less?   END_OF_DOCUMENT_TOKEN_TO_BE_REPLACED

Background: the Federal Trade Commission ah, decided that some boilerplate, non-binding, non-enforceable language in the Music Teachers National Association (a small nonprofit out of Ohio) represented an attempt to jack up prices in the high-stakes, ruthlessly competitive world of piano lessons (average lesson, according to the WSJ: $30). Not having any friends in court – and no, I don’t think that I’ll strike that out, given that it’s brutally truthful – the MTNA simply surrendered to the tender mercies of the FTC. The result?

This October, MTNA signed a consent decree—its contents as ludicrous as the investigation. The association did not have to admit or deny guilt. It must, however, read a statement out loud at every future national MTNA event warning members against talking about prices or recruitment. It must send this statement to all 22,000 members and post it on its website. It must contact all of its 500-plus affiliates and get them to sign a compliance statement. END_OF_DOCUMENT_TOKEN_TO_BE_REPLACED

…blithering idiot Joe Biden last night declared he was going to say something outrageous and followed through in his inimitable style by calling Republicans neanderthals.

We can only imagine the shocked face on Democrats when Republicans don’t roll over for Obama when he needs their votes for his Syrian folly.

…but I will add this: since Joe Biden is so pumped about the Violence Against Women Act, I’m wondering where I can find where Joe Biden ripped into the notorious wife-beater (and now deceased) former Congressman Charlie Wilson of Ohio*.  He would have had an excellent opportunity to do that, given that Biden went to Wilson’s former district to make a stump speech at the same time that the former Congressman was unsuccessfully trying to get his seat back; but for some strange reason I can’t find Biden’s no-doubt righteously indignant attacks on Wilson. END_OF_DOCUMENT_TOKEN_TO_BE_REPLACED

Yeah I suspect that this is not going to be actually hard to do.

The murder case prosecutors hope to bring against accused Cleveland abductor Ariel Castro, who police say induced several miscarriages by beating and starving one young woman, will be complicated by a lack of physical evidence and medical records, legal experts say.

The case consequently could hinge on whether Castro’s three victims, whom he is accused of holding captive for nearly a decade, take the stand and testify that victim Michelle Knight was pregnant and miscarried, according to Thaddeus Hoffmeister, a law professor at the University of Dayton in Ohio.

END_OF_DOCUMENT_TOKEN_TO_BE_REPLACED

In case you were wondering whether the Kermit Gosnell case was making a lick of difference:

The state is shutting down an abortion provider in Cuyahoga Falls.

The Ohio Department of Health recently issued an order to Capital Care Network, 2127 State Road, saying it was revoking the clinic’s Health Care Facility license to operate an outpatient surgical facility. The clinic is prohibited from “performing medical services, including surgical procedures, pharmaceutical services and anesthesia services,” according to an April 16 adjudication order.

This was done for health reasons: the Ohio DoH reportedly found “numerous violations during a Feb. 21 inspection, including undertrained staff, failure to maintain a safe and sanitary environment and failure to maintain patient documentation.”  Capital Care’s Toledo facility has already come under criticism for skipping key paperwork in an agreement with the University of Toldeo; this news will probably not help the pro-abortion cause in Ohio.  Which is no doubt a shame, but then again Capital Care could have simply kept its facilities up to code in the first place.

I note all of this because it’s sometimes forgotten that there’s more than one front in the war for public opinion.  In this case, it has yet to be determined whether or not the media will allow the populace to get the full blast of what happens when you allow pro-abortion (as opposed to pro-choice) activists to take our current practical restrictions on third trimester abortions to… logical conclusions.  But it’s certain that the people who make up state legislatures know all about Kermit Gosnell, and his Chamber of Horrors.  And, fortunately, some of them are in a position to do something about it.