Unless the name is ‘Adams,’ they rarely last beyond the third generation, and for good reason.

Background: somebody pointed out to Mr. Kennedy the President’s drone operations in Yemen/Somalia, and asked whether Kennedy supported the idea that the House needs to reestablish some of its oversight into the issue. This is actually a thorny problem; and while Kennedy’s answer (he essentially blamed that awful partisan gridlock, which is Democrat-speak for ‘those mean Republicans won’t give Obama a blank check’) would normally be only mildly stupid, it started off as being INCREDIBLY stupid.

END_OF_DOCUMENT_TOKEN_TO_BE_REPLACED

In an adaptation from his new book, The Finish—first reported for Vanity Fair—magazine contributing editor Mark Bowden reveals that President Obama intended to put Osama bin Laden on trial in the federal court system if he had been captured, rather than killed, during the Abbottabad raid.

But I guarantee that the trial wouldn’t have been in DC. Or Chicago. Or any other city that Obama wouldn’t have wanted to be a magnet for car bombs for the next three decades.

Anyway, I guess that this puts the final nail in that football that Obama keeps trying to spike over bin Laden.  Thank God that Navy SEALS have a better grasp on elementary counter-terrorism reality than Barack Obama does… END_OF_DOCUMENT_TOKEN_TO_BE_REPLACED

OK, now that I can actually see this Daily Caller article I’m not sure that I buy it:

At the urging of Valerie Jarrett, President Barack Obama canceled the operation to kill Osama bin Laden on three separate occasions before finally approving the May 2, 2011 Navy SEAL mission, according to an explosive new book scheduled for release August 21. The Daily Caller has seen a portion of the chapter in which the stunning revelation appears.

…largely because I have a definite dislike of anonymous allegations, particularly when they’re not backed up by any other evidence.  I find it at least mildly difficult to believe that people would have been able to keep this a secret for this long; this isn’t the Bush administration, which means that there’s no inherent loyalty there.  It’s not impossible, but I am definitely wary of any unsourced allegation that happens to reinforce my already low opinion of this administration.

Via Drudge comes the beginnings of clarity on this issue: it’s now being tacitly admitted by the Pakistan government that Saturday’s conflict was initiated by their own troops.  Essentially, Afghan/American troops were raiding Taliban in Afghanistan when Pakistan troops fired on them (the Pakistan government maintains that their troops were attacking on what they thought were insurgents).  NATO airstrikes were the result, which shot up two military posts and killed over twenty Pakistani troops.

The Pakistanis’ claim here is that they alerted NATO forces that it was their military posts that were being shot up (although they apparently informed NATO earlier that they had no troops in the area); one Afghan response to that was that the insurgents that NATO/Afghan troops were hunting had retreated to said posts and continued to shoot from there.  Which, if true, more or less illustrates the reason why you do not offer tactical shelter to people who are shooting at United States troops.  The end result will be the local real estate getting reconfigured into a state best described as ‘lunar landscape.’ END_OF_DOCUMENT_TOKEN_TO_BE_REPLACED

This is the tenth year anniversary of the 9/11 atrocities; and it is also the first year that I cannot in fact engage in my usual habit of taunting the author of said atrocities by reminding him that he failed, because I am alive and free, and he is in hiding.  That is because Osama bin Laden is now dead and almost certainly in Hell*, and there is frankly nothing that I can do or say any longer that would make the slightest bit of difference with regard to his fate.  So – being reminded by a friend online – I have instead prayed for the souls of all those who were lost in that atrocities that day, and for all of those who have been lost since then keeping the rest of us safe from further atrocities, and for those people’s loved ones.

I think that this is a good thing to do.

*There is always the chance of repentance.  God’s mercy is infinite; you just have to truly want to throw yourself on it.

The first uses an event involving the second to illustrate a point about the third.

Less cryptically: Andrew points out that Rudolf Hess’s body was evicted from its grave after the lease ran out*, cremated, and the ashes scattered at sea – largely because Hess’s grave had become a magnet for neo-Nazis, and nobody wants those guys around.  Which is largely why we threw Osama bin Laden’s rapidly cooling corpse into the Indian Ocean**; let jihadi-wannabes try to cover that in flowers.

No, actually, knowing human beings they probably won’t pick one spot and commemorate the SOB there.  They’ll probably pick three or four, then fight with each other which is the ‘best’ one (hopefully, with live ammo).

*Apparently you can lease grave space in Europe.  Hell, for all I know that’s the worldwide industry standard.

**Not to mention the Russians’ notoriously tight-lipped non-response to any and all polite inquiries on what happened to Hitler’s body.  I struck out ‘Soviets’ because while I no longer cut Commies any slack, I can’t say that I blame the Russians on this one…

Rep. Schakowsky, attempting to explain why photos of the military operation that killed Osama bin Laden would not be released, had this to say:

“These are pictures of a violent crime scene. This is a dead person. A dead Osama bin Laden,” she said.

Now, I will readily grant that normally a statement like this should be subject to Occam’s Razor.  The simplest way to explain the problems with the first sentence* would be to simply postulate that the person who uttered it is a semi-literate buffoon who is so unthinkingly programmed to parrot outworn and exploded progressive agitprop that she is truly unaware that even suggesting that Navy SEALs are criminals for killing Osama bin Laden is offensive.  Or that she has not contemplated that her aforementioned parroting handily confirms every not-nice said about the average progressive antiwar politician’s judgement, character, and native mother-wit.  Or that (by extension) Schakowsky is accusing fellow-Democrat President Barack Obama of war crimes, given that he gave the order.  Yes, really, if this had just been uttered by some nobody then you could simply chalk the comment up to pig-ignorance, coupled with thee utterer being a natural-born damned fool. END_OF_DOCUMENT_TOKEN_TO_BE_REPLACED

Huh.  Maybe Osama was shot in the back of the head.

I speculated earlier that a scenario consistent with the former bullet trajectory may have sparked the decision by the White House to keep the pictures under wraps: this suggests that I may have been right.

PS: I continue to have an utter lack of outrage over the possibility, by the way.

Hell, switch ’em out with half the punditocracy in this country and we’d come out ahead.  I mean, you expect some of this stuff from an eight year old; it’s only when it comes out of the mouth of a thirty-something Ivy League journo-drone that you start wincing.

In lighter news, the German media has discovered the super-secret insignia of the team that took down Osama bin Laden! 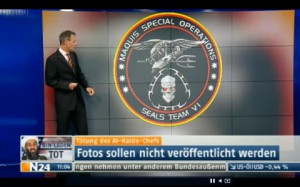 Via RedState reader donnybrooke, who managed to render me momentarily speechless with this one. Kai donnybrooke.