As I said in Twitter earlier: the Democrats really need to learn not to call up what they cannot put down. Apparently, (mostly female) Obama for America staffers had to brandish chairs to keep the (mostly male) Occupiers at bay:

END_OF_DOCUMENT_TOKEN_TO_BE_REPLACED

That’s how you do it: you look for the weak one in the group, you make sure that he (it’s usually a he) understands just how much trouble he’s in, and then you start to squeeze him, psychologically.  You squeeze, and you listen for the pop.

One of five men accused of attempting to blow up the Ohio 82 bridge in the Cuyahoga Valley National Park pleaded guilty Wednesday and agreed to cooperate in the prosecution of his four former co-defendants.

Anthony Hayne, 35, of Cleveland, entered the plea at a hearing in U.S. District Court, where lawyers for the other four suspects indicated they would argue at trial that the foiled bomb plot was a case of entrapment by the FBI and a paid informant.

Mind you: Occupy Wall Street was pretty much a collection of the weak to start with, so this may have been a race to the bottom anyway.

PS: Wonder what else Anthony Hayne knows about?  Because I’m sure that he’d love to reduce that prison time further…

Apparently last night/early this morning the Chicago cops sent out a Long Range Acoustic Device, or LRAD, to disperse the rioters… excuse me, the ‘peaceful protesters*’.  If you’ve never seen one of these before, well, that probably means that you’re more used to activism on the Tea Party model.  Oddly enough, the police rarely if ever need to use crowd-suppression devices on crowds that end their protests by cleaning up all their loose trash and depositing it in the nearest public waste receptacle.

Think about that, ye Occupiers.  Also: the hygienic and social advantages of soap and deodorant.

Walter Russell Mead, writing the epitaph of the Occupiers:

To some degree, [the Occupy movement] was killed by its “friends.” The tiny left wing groups that exist in the country jumped all over the movement; between them and the deranged and occasionally dangerous homeless people and other rootless wanderers drawn to the movement’s increasingly disorderly campsites, OWS looked and sounded less and less like anything the 99 percent want anything to do with. At the same time, the movement largely failed to connect with the African American and Hispanic churchgoers who would have to be the base for any serious grass roots urban political mobilization. The trade unions picked up the movement briefly but dropped it like a hot brick as they found the brand less and less attractive.

It is as if the Tea Party had been taken over by the Aryan Brotherhood and delusional vagrants while failing to connect with either evangelical Christians or respectable libertarians. The MSM at one point was visibly hungering and thirsting for exactly that fate of marginalization to happen to the Tea Party, and the MSM did its klutzy best to tar the Tea Party with that kind of Mad Hatter extremism. The Tea Partiers by and large (not always or cleanly) escaped the fatal embrace of the nutters and the ranters on their side of the spectrum; OWS was occupied by its own fringe, and so died.

END_OF_DOCUMENT_TOKEN_TO_BE_REPLACED

You may recall that in October of 2011 Democratic Massachusetts Senate candidate Elizabeth Warren claimed partial ownership of the entire Occupy Wall Street phenomenon. Specifically, Warren claimed that she had “created much of the intellectual foundation for what they do…”

So, I have to ask: which part of said foundation is her handiwork?  Is it the unicorn? 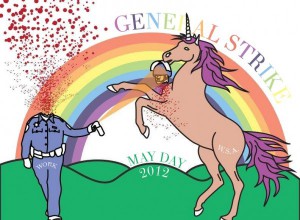 …Or the decapitated cop spraying blood?

PS: As God is my witness, I did not create that picture.

Yup.  You’re all shocked.  Short version: dirty hippie wannabes tried to take over Zuccotti Park, cops kept them out, cop gets stabbed with scissors, dirty hippie wannabes try to keep cop from getting to the hospital.  You know, at some point these people are going to start plotting about how best to off them some cops.  Or maybe some soldiers.  Or dependents of either (they’re usually softer targets).  That’s how it usually ends: start with the SDS, end with the Weathermen…

Via JWF, via AoSHQ Headlines.

This New York magazine article on the Occupy movement is interesting, and that’s not a euphemism: author John Heilemann is not only aware that the supposedly leaderless movement has plenty of self-appointed (and I’d add, ‘imposed’) leaders to it, but he’s even willing to admit to it in writing.  Heilemann also has some pretty good insights on the Occupy movement, and the Democratic establishment, and how the two are, ah, ‘interacting.’ All in all, it’s about as fair-minded an article as you could hope to get from somebody who is sympathetic to a movement that thinks that the act of defecating on police cars is a valuable addition to public discourse.

And yet: the following bit of advice on what the Occupiers’ long-term goals should be is, well, poor. END_OF_DOCUMENT_TOKEN_TO_BE_REPLACED

But never mind that, Comrade.  Surely it must be understood that oversight of the glorious proletarian class struggle against the capitalist bosses and their running-dog international banker lackeys requires a full effort from those chosen to speak on behalf of the workers, yes?  And since the Struggle has reached a critical moment, the stresses on, and expectations of, those individuals so chosen are at their highest point.  It is well understood that at such moments of crisis that resources must be allocated with an eye to the higher aims of the Revolution, and not necessarily to a sentimental devotion to faux-egalitarian thinking.  As has been said: “From each, according to his ability. To each, according to his needs!”

It is thus obvious that the needs of the Struggle absolutely requires the use of $700/night hotel rooms as an alternative to commutes. END_OF_DOCUMENT_TOKEN_TO_BE_REPLACED

At least, not for the front page: it’s a long range video of a [Seattle*] Occupier literally defecating on a sidewalk as the cars whiz by.  Note when you watch it that the Occupier uses a garbage can to give himself(?) some privacy from the other Occupiers, while clearly being indifferent to the reaction of the folks in the cars: I’m no psychologist, but I suspect that this probably gives you an idea of just who said Occupier truly recognizes as being important.

Which is some pretty hardcore degeneration, right there.

PS: Can’t remember where I saw this first, sorry.  Drudge?

[*The Blaze reported that this video is actually from Seattle.  My bad.]