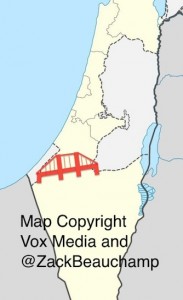 Basically, Vox thought that there was a bridge from the West Bank to Gaza.  No, really.  Let me show you the lengths involved: END_OF_DOCUMENT_TOKEN_TO_BE_REPLACED

Now it may be because I’m this horrible, horrible neoconservative Right-Wing Death Beast and everything – but I have to admit: articles like this confuse me.

The United States faced increasing pressure on Tuesday as the Palestinian quest for statehood gained support from Turkey and other countries, even as the Obama administration sought an 11th-hour compromise that would avoid a confrontation at the United Nations next week.

With only days to go before world leaders gather in New York, the maneuvering became an exercise in brinkmanship as the administration wrestles with roiling tensions in the region, including a sharp deterioration of relations between three of its closest allies in the region: Egypt, Israel and Turkey.

…But then again, I am a neocon RWDB, which means that I take the UN as seriously as it deserves to be treated… which is to say: when it comes to Israel, not at all.

END_OF_DOCUMENT_TOKEN_TO_BE_REPLACED

Is this correct, Mr. President?

Palestinian leader Mahmoud Abbas on Saturday told reporters in Cairo that he is convinced that US President Barack Obama is firmly committed to finally ejecting the Jews from Judea and Samaria.

Abbas spoke to the press after briefing Egyptian President Hosni Mubarak on his visit to the White House late last week, during which Obama apparently agreed with his guest that existing Jewish communities in Judea and Samaria must not even be allowed to experience “natural growth.”

(Via Fausta) While I am willing to believe that there may have been either a breakdown in communications somewhere – or that yet another Palestinian leader is willfully never missing a chance to miss a chance – there needs to be some clarification on this issue. Israel is not going to even freeze settlements in the West Bank, let alone dismantle them.  Meanwhile, the Palestinians apparently expect that the settlements will be removed, because that’s what the USA has decided to do.  The two positions cannot be reconciled.  This really does need to be addressed: if the President goes to Cairo without everybody involved already knowing precisely where his administration stands on this issue, the President’s Cairo speech will fail.  And by ‘fail’ I mean ‘start up another round of violence.’

Which will not be the President’s intent, but that won’t matter.