Background: there’s an ant ‘colony’ in Poland whose layout will be familiar with anybody who has ever read a science fiction story about prison planets.  Essentially, there’s this one place with almost no food and at the limit of an wood ant’s temperature tolerance. So normally they wouldn’t colonize it, except that there’s a drain leading to it that wood ants regularly fall into.  So you get this colony without queens or eggs and apparently at near-starvation level; the colony keeps growing because ants keep falling down the drain at higher than replacement rates.  So, the bad news there is that – in the tradition of the aforementioned science fiction sub-genre – eventually some sort of Uber-ants* will arise, figure out a way to storm up the drain, and take revenge upon the colony that left them all to die.

The good news?  …This one isn’t actually really our fault.  I don’t think that the ants have any real reason to go to war with us, at least. I mean, sure, the drain, but that’s what you get when you build right next to a drain…

…when he suggested that they’d make good impromptu airstrips in case of a military invasion by the Soviets.  Err, sorry: ‘Russians.’  Old Cold Warrior reflex.  Anyway, and not to be all Cold War spy-nostalgic or anything, but if you look at a map to see where the airports (Reuters reports them as being  Lodz, Rzeszow and Lublin) that were renovated are: END_OF_DOCUMENT_TOKEN_TO_BE_REPLACED

I’ve had my, ah, difference of opinions with Anne Applebaum, but she sounds damned worried here:

Over and over again — throughout the entirety of my adult life, or so it feels — I have been shown Polish photographs from the beautiful summer of 1939: The children playing in the sunshine, the fashionable women on Krakow streets. I have even seen a picture of a family wedding that took place in June 1939, in the garden of a Polish country house I now own. All of these pictures convey a sense of doom, for we know what happened next.September 1939 brought invasion from both east and west, occupation, chaos, destruction, genocide. Most of the people who attended that June wedding were soon dead or in exile. None of them ever returned to the house.

In retrospect, all of them now look naive. Instead of celebrating weddings, they should have dropped everything, mobilized, prepared for total war while it was still possible. And now I have to ask: Should Ukrainians, in the summer of 2014, do the same? Should central Europeans join them?

END_OF_DOCUMENT_TOKEN_TO_BE_REPLACED

As my wife put it: “Detroit?  I thought that you were looking at pictures of Poland.” 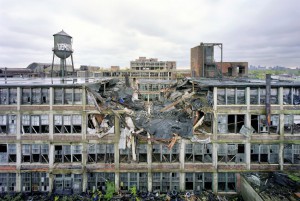 PPS: This is the result of forty years of one-party, liberal Democratic rule.  Avoid it.

Polish President Lech Kaczynski was killed early Saturday along with his wife, several top military officials, and the head of the national bank when their plane crashed at a western Russian airport, officials said.

“There are no survivors,” said Sergey Antufyev, the [acting] governor of Smolensk, where the plane was trying to land when it crashed.

A spokesman for Poland’s Foreign Ministry, Piotr Paszkowski, said earlier that it was probable that everyone on board was killed.

President Kaczynski and his party were on their way to commemorate the 70th anniversary of the Katyn Massacre; the site at Katyn has become the visible symbol of the atrocity where twenty thousand Polish officers captured during the Soviet Union’s sneak attack on Poland were secretly executed by the NKVD* (ancestor to the KGB), and has strong resonances to modern, post-Warsaw Pact Poland. While the continuity of government in Poland has not been completely compromised (as is common in Europe, the head of government is the Prime Minister, who was not on the flight), the Polish military has been devastated by this – as has been Poland generally.

The President of the United States and other world leaders have released statements of sympathy and condolences to Poland – as do we; Kaczynski and Poland were and are true friends to the United States. Our prayers and sympathies go out to that country.

*No Russian government has yet to admit this to be a war crime.

I’m having difficulty working it out.  Is it because:

…or should I just embrace the healing power of ‘and?’