James Richardson makes an eloquent case for why Nevada Democrats – explicitly including current Senate Majority Leader Harry Reid – should put local needs over partisan ones by making it clear that the American Bridge stalker-PAC would not be given free rein in a hypothetical Las Vegas GOP convention. Unfortunately for Las Vegas business owners and workers, Nevada Democrats will do nothing of the sort.  Loyalty flows only uphill in the Democratic party these days: and if any of the little guys get hurt by it, too bad: they shouldn’t have been little to start with*. END_OF_DOCUMENT_TOKEN_TO_BE_REPLACED

I’m going to use a bit of Sean’s quote here, because I know that he’ll forgive me:

The story buried by the national media’s fixation with Hillary Clinton’s next move is the solid bench that Republicans have been efficiently building – not just in Democrat-blue Pennsylvania, but across the country – since her husband left office in 2000.

“The presidency is one election, and Democrats and Republicans have basically been alternating it for the better part of a decade now,” said Sean Trende, elections analyst at RealClearPolitics. “But it is the GOP that is ascendant down-ballot.”

“Part of the disparity comes from the fact that not all the state senate seats were up in 2012,” he said. “But overall, Democrats pay the same penalty in state legislative districts that they pay in congressional districts” – their coalition has become too geographically concentrated to function well in legislative races.

END_OF_DOCUMENT_TOKEN_TO_BE_REPLACED

One of the things I’ve learned this week is that Republicans are the most incompetent racists ever. They’re just bloody awful at it.

…but then, you knew that already. The GOP is, after all, the political party where a President who was the governor of a Southern state can casually say “We looked like a normal couple” when explaining how he and his (African-American) National Security Advisor managed to avoid being detected on their way to a surprise visit to the troops in Iraq*.  Yet one more way that former President Bush continues to be a large, indigestible lump in the Left’s narrative… but I digress.

*That, by the way, is what an actual dog whistle ‘sounds’ like: and the message that it gave to racists was You’re not welcome around here.

US News and World Report, in the process of pointing out that, hey, maybe we need a little whiteboard time in our political debate right now:

Ironically, I don’t really recognize this as a ‘change:’ I figured out about a decade ago that there will be no Social Security for me when I retire.  The GOP being able to fix things to the point where there will be?  …Yeah, that would be a change.

There has been a certain amount of …well, the usual invocation of Ronald Reagan’s memory in order to justify other people’s positions on issues, particularly the ones where they’re not majority positions in the Republican party.  Latest offender – and it’s a shame that I have to use the word, in this case: I like the guy – is former Florida governor Jeb Bush, who wondered yesterday whether Reagan would be able to get Tea Party/conservative support these days.  Well, it’s interesting that today is the 25th Anniversary of Reagan’s Brandenburg Gate speech*.

Background: As all of you know, it’s not a true critical Obama speech without at least one howler of a historical error in it somewhere, and last Thursday’s was a beauty of one: did you know Lincoln founded the Republican party?  Of course you didn’t know that: after all, you’re almost certainly better-versed in actual American history than the Harvard-educated n-dimensional genius who is currently President.  And, no, this wasn’t the speechwriter’s fault this time: that Lincoln bit wasn’t in the original.  Hence the kerfluffle: as The American Thinker noted, PBS used the original embargoed speech transcript, while the New York Times used the actual speech itself to generate its transcript.  All of which is not really all that newsworthy… except that apparently people are trying to point this little detail out to PBS, and PBS is refusing to either change its transcript to reflect objective reality, or even publish the calls for correction.

Assuming this is true… oh, my.  Screening comments.  Tsk, tsk, tsk… what’s that?  “You do that all the time, Moe?”  Well, yes.  Cheerfully, in fact.  But that’s because I know how to do it properly.  Direct-to-spam protocols for querulous whines, bitter profanity, and inchoate-rage-presented-as-dispassionate-truth-telling is one thing; but, really.  I watched the speech.  Here, you can  watch the relevant part of the speech, too:

PBS mucked up.  There’s actually nothing really wrong with providing a copy of an embargoed speech the moment it’s no longer embargoed; and a simple Update: the transcript has been corrected to reflect changes made to it in the delivery would have been a reasonable thing to do.  All that they’re doing with this strategy is to take partial ownership of President Obama’s ignorant gaffe. 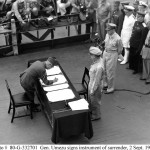 The formal capitulation took place yesterday, and signals an end to Gov. Dayton’s ill-conceived, ill-timed, and ill-executed attempt to dominate the Minnesota legislature in the same way that predecessor Gov. Tim Pawlenty (R, MN) did during his term in office.  The very short version, for those not following along: Minnesota Republican legislators wanted a $34 billion dollar, two-year budget with no new taxes; Dayton wanted $3 billion in business-killing tax hikes.  Republicans told him no, and sent him a budget, which Dayton vetoed.  The Minnesota government shut down – which meant, among other things, that Minnesotans were in critical danger of running out of beer and not being allowed to fish.  Faced with such proven evidence of abject incompetence and idiocy on Dayton’s part, eventually the Governor was brought to heel like a whipped dog; his formal capitulation soon followed.  Final score: $35.7 billion over two years with no tax hikes – and legislators in Minnesota have to pretend that Gov. Dayton was not savagely politically beaten.  No, seriously… apparently this is supposed to be framed as being a ‘compromise.’

Interestingly enough, post-capitulation news articles on this don’t seem to mention Pawlenty nearly as much as they did, pre-capitulation.  Although that may just be a sort of terrible pity towards Dayton, who did turn out to be a very slender, and trivial to break, reed…

END_OF_DOCUMENT_TOKEN_TO_BE_REPLACED

I think that this quote below from a New York Times article on whether the GOP will allow themselves to be stampeded on irresponsibly raising the debt ceiling might just be fairly representative of attitudes among our freshman class. More to the point, I think that the New York Times is coming to the same conclusion:

“Re-election is the farthest thing from my mind,” said Representative Tom Reed, a freshman Republican from upstate New York. “Like many of my colleagues in the freshman class, I came down here to get our fiscal house in order and take care of the threat to national security that we see in the federal debt. We came here not to have long careers. We came here to do something. We don’t care about re-election.”

In fact, the New York Times may – I repeat, may – be even sufficiently concerned about this issue that it’s prepared to do some actual journalism on the subject. The quotes from Republican legislators were all on-point (including a rousing one from Sen. Lindsey Graham, of all people), and there were much fewer attempts to argue the Democratic talking points for them. The NYT even went so far as to not just remind its readers that Democratic rhetoric now doesn’t match their rhetoric from 2004; it actually noted that “[t]he increase then was $800 billion. The White House is now seeking an increase of at least $2.4 trillion. That would lift the limit to at least $16.7 trillion, about twice the level set in 2004.”

Yes, I recognize the irony of praising a newspaper for writing something that looks like actual news. This is the world we live in.

It’s hardly a surprise – Pawlenty has been arguing since January that automatically raising the debt ceiling without exhausting other options (read: spending cuts) first is a bad idea – but the video below shows that the former Governor of Minnesota continues to want Republican legislators to not back down on this issue:

As GOP 12 noted, this statement by Pawlenty…

Now is the time. The hour is late, and these problems are big, and the only way you’re going to get people to do something tough is to put their backs up against the wall.

…sounds a lot like what Erick Erickson was saying this morning: END_OF_DOCUMENT_TOKEN_TO_BE_REPLACED

I suspect that the Democratic party probably doesn’t want to ever see this sentence from a Harvard statistical survey appear in a news story:

Taken together, the results indicate that Fourth of July celebrations in the United States shape the nation’s political landscape by forming beliefs and increasing participation, primarily in favor of the Republican party.

…for fairly obvious reasons .  Short version: going to Fourth of July celebrations (using a statistical rule of thumb* of good weather = participation) as a child results in an increased possibility of voting Republican as an adult (it apparently doesn’t move the needle at all when it comes to voting Democratic).  Oh, and progressives are why the Fourth became a public secular holiday in the first place**.  Lastly: if you want to zap your kids into patriotism and/or Republicanism, the key dates to get them to a parade are from 7 to 10 for later partisan identification, and 15 to 18 for increased voter participation. END_OF_DOCUMENT_TOKEN_TO_BE_REPLACED