Look, I don’t want to get into the details of this case, largely because I haven’t been following it that closely and I suspect that I’d just blame the whole thing on Jay Nixon, whether he deserved it or not. Which he so totally deserves. Anyway, look at this picture:

You know why that police car is getting flipped over? It’s getting flipped over because there’s a guy with a camera there to put the whole thing on the nightly news. Most of the media has been absolutely salivating over the chance to cover a riot, and it looks like they’re getting their wish. Hope the newsies get their bylines in fast, though: it’s going to get a lot colder tomorrow in Ferguson, and on Wednesday it will snow.

And it’s this: if the current people in charge over there don’t come up with an acceptable answer to the problem of Islamist (note suffix*) violence, the people on the sharp end of that violence will go looking for groups that do have an acceptable answer – or at least one that’s acceptable to the people on the sharp end.  And Western Europeans have a profoundly sh*tty track record when it comes to peaceful wholesale revisions of the social contract**.

So I guess that’s two comments.

END_OF_DOCUMENT_TOKEN_TO_BE_REPLACED

What?  Oh, I certainly hope that the use of that phrase infuriates the cultural relativists: it’s largely because of them that we’re seeing rioting in Great Britain right now (well, that and the straight-up bigotry of low expectations racism that’s a good deal more prevalent among the Left than the Left perhaps would care to admit, or even acknowledge).  Frankly, I am all about cultural imperialism.  More accurately, I am all about my culture’s cultural imperialism.  It’s nothing personal: we’re just better than everybody else.

Anyway, it’s said that good fences make good neighbors; turns out that good neighbors make one heck of a good fence, too.  Particularly when they’ve just embraced the hot new fad of American-style baseball.  Or just come from their place of work so quickly that they completely forgot to put down their kebab doner knives.  Or whatever creative excuse that the Brits are coming up with to be standing around in groups with a wide variety of hand weapons. END_OF_DOCUMENT_TOKEN_TO_BE_REPLACED 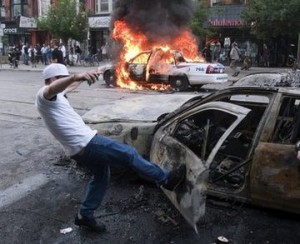