Seven years after Katrina destroyed neighborhoods, killed more than 1,800 people and caused some $108 billion in damage, many of the people caught in its crosshairs are reaching into their wallets and cupboards to try to bring relief to the Atlantic Coast.

Church groups, nonprofits, City Hall and individuals in New Orleans and along the Mississippi Gulf Coast have begun sending care packages, donating money and staging volunteers for the clean-up and recovery efforts.

Good on them.  Particularly since the recovery is… not going so well in New York.

Not good news, considering that the area is still trying to recover from the earlier hurricane; they’re talking another round of evacuations and loss of power.  I’m keeping the folks up there in my thoughts and prayers, and I hope that you’ll do the same.  Also, the Salvation Army is still working in the area; donations may be made here.

You have got to be kidding me. 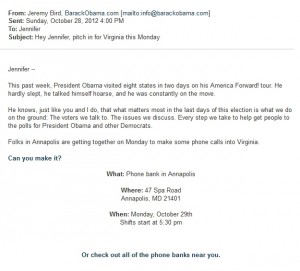 …For those who can’t see the photo: Fox News is reporting an email where Obama for America asked for volunteers to man the Annapolis, MD phone banks, starting at 5:30 PM this afternoon.  At that point, Hurricane Sandy will be descending upon the Chesapeake Bay area and will make landfall some time between 8 PM this evening and 8 AM tomorrow.  Annapolis is in the possible storm track.  It WILL get hammered by winds, rain, and flooding.

So NO.  DO NOT GO INTO ANNAPOLIS TO PHONE BANK TODAY.  IT CAN WAIT.

Sheesh.  Are there no adults in Obama for America?  …Sorry, rhetorical question.

…he should go find them, start filling them, and generally doing something more useful with his time than politicizing Hurricane Sandy.

“We’re coming down to the 11th hour. We’re facing a violent storm,” Clinton said according to the Connecticut Mirror. “It’s nothing compared to the storm we’ll face if you don’t make the right decision in this election.”

Bill Clinton was in Connecticut, made these comments, and then left Connecticut for the considerably less likely to flood Ohio*. Because Bill Clinton is, well, a schmuck sometimes. And I say that as somebody who didn’t spend the Nineties loathing and despising the man. Or the Oughts. Or the Teens, really.

*Which should give you an idea of how bad it’s going to get on the East Coast.  And if you still don’t, well, our media will be happy to tell you.