The answer is actually fairly simple, contra Slate. In 2012 The Daily Show skewed 10% Republican, 41% Independent, 45% Democratic; or, if you prefer… 14% conservative, 42% moderate, 43% liberal.  I’m going to hence go out on a limb here and suggest that say that the Daily Show caters to a distinctly left-leading audience.  And from there it’s obvious: liberals don’t groove as much on the show because its new host Trevor Noah is a black dude.

I mean, shoot, it’s not exactly a secret that white progressives have real difficulty taking minorities seriously. Or letting them mainstream. God knows getting one to vote for a black candidate can be an exercise in frustration…

Because of the Greater Internet Fuckwad Theory, of course (pardon my language). It goes like this: give a normal person an audience and anonymity, and he will very possibly turn into a total fuckwad*. See how easy that is to understand? Why, you don’t need a complicated, ax-grinding ideology to explain this condition.  Now, if you’re writing for Slate and have a deadline, you might want to have a complicated, ax-grinding ideology to explain this, but the rest of us understand that if you have to shave, you should shave with Occam’s Razor.

*Not everybody does, of course. But we’re not talking about everybody, either. We’re talking about the fuckwads. Also: note that anonymity in this context includes ‘people who assume that nobody will ever call them out on their intolerance.’ Some of those people use their real names.  Some of them, in fact, write for Slate.

It’s not that I don’t object to the sentiment (i.e., that we’re starting the 2016 campaign too early and obsessively focusing on things)… 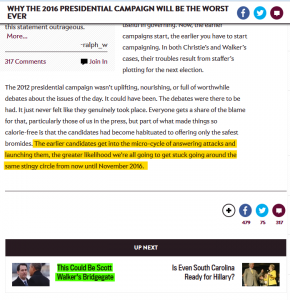 …it’s just that Slate is pretty much an integral part of the problem. Mote, beam, eye, you know the drill. END_OF_DOCUMENT_TOKEN_TO_BE_REPLACED

…’alarm’ would not be the verb that I would have used.  Try ‘reassure.’ Or even ‘fill with anticipatory glee.’

PS: Slate, despite its delusions, is not particularly centrist.  If it were it’d be more pro-gun, more pro-life, and arguably more pro-Israel.

There are those that will call that ‘poisoning the well,’ as Peter Singer was saying stupid things about defunding the coal industry instead of vile things about how parents should be permitted to kill their babies. To which I say: fine. I’m not making a logical argument*. I’m highlighting the fact that Slate published a monster. I’m sure that the website feels that it can easily weather my disapproval of their editorial process.

PS: link via here. I decline to directly link to monsters if I can help it.

*I know that this will shock some people, but logic is not actually the game-ender that the Internet collectively seems to think that it is.  I know, I know: even to write that out feels more than a little transgressive (I am, after all, an Internet denizen). But it remains true nonetheless.

(via @jaketapper) The ironies abound in this passage from Jacob Weisberg’s rhetorical roundhouse kick to Ron Suskind’s face:

The most famous thing Suskind wrote about the Bush administration was a passage in an article he published in the New York Times Magazine, quoting an anonymous Bush “aide”:

“The aide said that guys like me were ‘in what we call the reality-based community,’ which he defined as people who ‘believe that solutions emerge from your judicious study of discernible reality.’ I nodded and murmured something about enlightenment principles and empiricism. He cut me off. ‘That’s not the way the world really works anymore,’ he continued. ‘We’re an empire now, and when we act, we create our own reality. And while you’re studying that reality—judiciously, as you will—we’ll act again, creating other new realities, which you can study too, and that’s how things will sort out. We’re history’s actors … and you, all of you, will be left to just study what we do.’ “

This became one of the most quoted lines about the Bush years, repeated thousands of times as evidence of his administration’s willful dishonestly about everything from Iraq’s WMD to the budget. “Reality-based” turned into a liberal slogan of the era, printed on T-shirts and bumper stickers. How could it not, given the deliciousness of the quote? But did anyone in the Bush administration ever say these words to Ron Suskind? He has never given us any reason to believe that anyone did. And given the unacceptable liberties he takes with quotes from named sources—see below—I have my doubts.

Let’s count them, shall we? END_OF_DOCUMENT_TOKEN_TO_BE_REPLACED

It’s always fascinating to see how non-political people treat Twitter.  There are people out there who don’t use it as a trusted-source to trusted-source communications network that can’t be jammed by one’s enemies*?

PS: By the way… damn straight it’s not rude to ignore a Tweet sent at you.  Particularly when it’s sent by one of those aforementioned would-be jammers.

*God knows the Online Left keeps trying; unfortunately, they’re critically hampered by their hierarchical, top-down worldview.  In retrospect, the slow gelding of the Left-blogosphere by the Democratic establishment was probably not to benefit of either, if only because it is worse than useless to even try to impose groupthink on what is rapidly becoming a true Cloud.

A few days ago I was mean to Slate.com by not only suggesting that the answer to their survey question “If you’re a Democratic voter, what do you hear when the president says, “Buck up”?” should be “It puts the lotion on its skin or else it gets the hose again;” I passively-aggressively suggested that other people should join in.  Judging from comments, a couple of people felt like this was a fine idea – but as Constant Reader Demosthenes notes here, none of those responses seem to have made it through.  Including, I should add, mine (which I had done from memory, and so had not gotten quite right).

Let me be clear: if the number of people who submitted “It puts the lotion on its skin or else it gets the hose again” broke double digits I’ll be shocked.  But there were some; and I can’t imagine why it wasn’t at least mentioned.  After all, it’s just as true as “f*ck off” (without the asterisk), which was a very popular cross-spectrum choice.

Very odd.  Kind of funny, though.

PS: This is about the level of caring that I plan to expend on this, by the way.

It would be mean to click this link and answer the survey question “If you’re a Democratic voter, what do you hear when the president says, “Buck up”?” with “It puts the lotion on its skin or else it gets the hose again.”

It would be very, very mean.

On the other hand, if you do that then you get to read John Dickerson being aggrieved and upset that the Democratic party is currently using him and his the way that the bear used the rabbit (NOT SAFE FOR WORK!).  So there’s that.